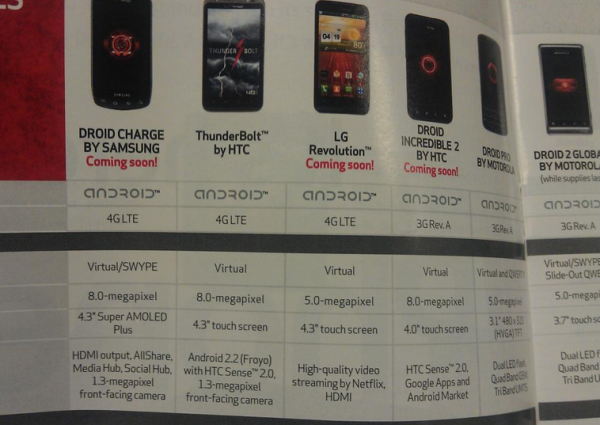 There are times when the LG Revolution feels like the forgotten step-child of Verizon’s 4G LTE family, but it shouldn’t be, especially since it will likely launch as the first Android phone with Netflix.  We’ve seen a working Netflix app appear a couple of times at trade shows through this device, so it’s fair to say that the screenshot above doesn’t surprise us.  The good thing here though, is that it’s the first time we’ve seen a “Coming soon!” and Netflix mentioned on the same document next to the phone.

To recap the Revolution a bit, just know that it’ll be priced at $249, has a 4.3″ screen, 5MP camera, 1GHz single-core Snapdragon processor, will run 2.2, and could possibly be stock, but more than likely will have an LG skin on it.  I’d call it the least awesome of the four devices from Verizon, but that doesn’t mean it still isn’t good.