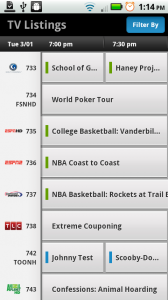 Back in December, Comcast released their XFINITY Mobile app which allowed users to access their accounts, check and respond to email, and set up DVRs.  Now today, they’ve introduced the new XFINITY TV app to Android which eventually will allow you to watch On Demand movies and shows directly on your device.  I’m still trying to decide why we needed two separate apps, but you’ve got to like the direction this new one is headed.  Aside from the “coming soon” On Demand watching, the app lets you control your DVR, browser/filter TV listings, and even change to a particular channel using your device.

Free in the market.

Find What to Watch Faster and Easier than Ever Before – Browse On Demand, Change Channels and Program DVRs – Free for Comcast Digital Customers

PHILADELPHIA – March 1, 2011 – Comcast Corporation (Nasdaq: CMCSA, CMCSK) today announced it has made available its popular Xfinity TV® app to an even broader audience, officially launching it on Android™ Market. The Xfinity TV app, which is free to Comcast digital subscribers, enables customers to search and instantly find what to watch among thousands of choices — including top movies and premium cable shows — on TV, On Demand, online or on a smartphone.

The Xfinity TV app originally debuted on the Apple iOS in November, and since then it has been downloaded more than 1.3 million times. Now, customers with Android-powered mobile devices can also enjoy its many entertainment controls and features, including:

“Android has a passionate, loyal and growing fan base who we believe will enjoy managing their Xfinity TV experience in the palm of their hand,” said Matt Strauss, Senior Vice President and General Manager, Comcast Interactive Media. “This important launch is another key milestone in Comcast’s ongoing effort to provide Xfinity TV service on as many devices as possible including smartphones, tablets, laptops and PCs.”

Through a series of regular development updates, the Xfinity TV app for Android will continue to expand its features and functionality. Soon, customers will be able to access even morepersonalization features that enable them to create and manage a watchlist, customize their favorite TV listings and receive recommendations, plus other shortcuts and controls.  Later this year, Comcast plans to enable live TV streaming in the home, so customers can turn their tablet into an additional TV screen.

The Xfinity TV app, along with the Xfinity Mobile app, are both examples of Comcast’s ongoing commitment to deliver more choice and control to its customers through its Xfinity services, which include 100+ HD channels, 50 to 70 foreign-language channels, On Demand video choices increasing to 25,000 and increased broadband speeds of up to 105 Mbps. Xfinity also offers thousands of online entertainment choices (at www.xfinitytv.com) as well as other applications that enable customers to program a DVR from the Internet or a mobile device, and cross-platform features like Caller ID to the TV and PC.

Comcast Corporation (Nasdaq: CMCSA, CMCSK) (www.comcast.com) is one of the nation’s leading providers of entertainment, information and communications products and services. Comcast is principally involved in the operation of cable systems through Comcast Cable and in the development, production and distribution of entertainment, news, sports and other content for global audiences through NBCUniversal. Comcast Cable is one of the nation’s largest video, high-speed Internet and phone providers to residential and business customers. Comcast is the majority owner and manager of NBCUniversal, which owns and operates entertainment and news cable networks, the NBC and Telemundo broadcast networks, local television station groups, television production operations, a major motion picture company and theme parks.