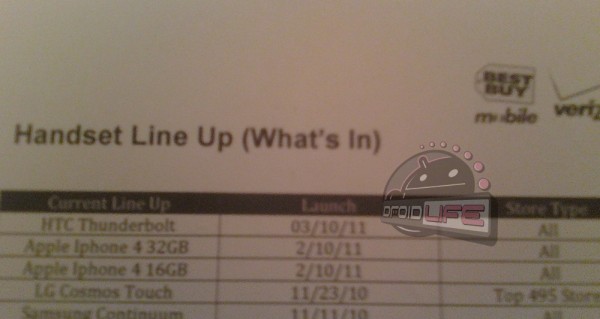 The big rumor running around tech sites today suggested that the HTC Thunderbolt would be out next week on March 3rd or 4th, but the screenshot we just received from our friends at Best Buy suggests that it’ll be another week after that.  March 10th is apparently the date that BBY is expecting to launch the phone and we’re of course skeptical, but at least it’s not from a random guy in a forum.  Can you all wait another couple of weeks?

Update:  This document was spammed out to every tech site on the planet last night and as many have pointed out, it looks a little odd to be taken too seriously.  What’s even whackier, is that the tipster sent us a second email yesterday pointing out the fact that the Best Buy tweet about the 4th had been removed, only we already knew that.  Fishy, fishy, fishy.