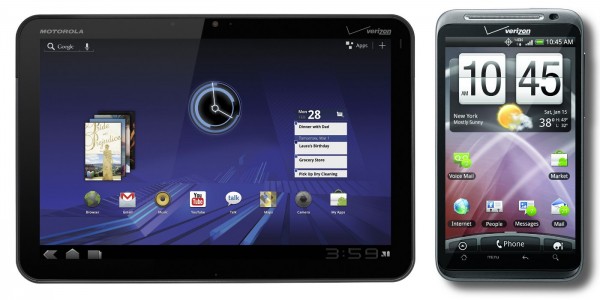 Well at exactly 12:58PM we received a tip that at launch, the Motorola XOOM would be introduced at $799 with the HTC Thunderbolt coming in at $250.  The prices weren’t surprising and fit exactly what we had imagined, but were hesitant to go with it.  And then, pictures providing visual evidence popped up confirming our tip.  So here we go with the first glimpse into Verizon’s 4G LTE pricing model.

We’re assuming that the XOOM price is unsubsidized, but who knows if it ever will be subsidized?  Remember Verizon’s pricing model for the Galaxy Tab?  Would any of you be willing to pay $800 to have the best tablet on the planet?  Looks a little steep, but this is supposed to be a game-changer.

And the Thunderbolt at $250 (which we’re assuming is subsidized)?  We brought up the topic last week to see if you all would be ready to pay more than the usual $199 for these new 4G LTE devices, and your responses were all over the place.  Seeing it now, in the flesh, how do you feel?