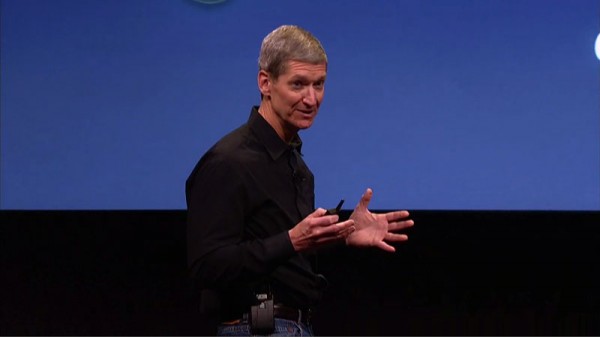 Apparently Steve Jobs isn’t the only exec over at Apple with a mouth on him.  Tim Cook, who is running the day-to-day show for the time being, dropped a variety of comments during an earnings call today on the current tablet market that is aiming to compete with their iPad.  His first shots were directed at Windows tablets, and rightfully so, has anyone actually purchased or even seen one of those?  His second set of remarks were directed at…you guessed it…Android and the 1 legitimate tablet on the market.  Yes, I said one, because the Galaxy Tab is the only one worth even mentioning at this point.

Cook described the “variety shipping today” (again, the Galaxy Tab is it) as a tablet that is just a “scaled-up smartphone” and that it’s quite the “bizarre” product.  Maybe someone should have given Tim some new material, as we’ve heard this time and time again for months now and 100% agree.  In fact, Google came out long ago and made it perfectly clear that Android 2.2 is not meant for tablets, and that they would not be supporting those that chose to run it.  So that was nice of Apple’s COO to mention it for the 100th time, but again, none of us are going to argue against these claims.

Of course, he swam right around the upcoming onslaught of Honeycomb tablets, calling them “vapor” because, you know, they don’t exist yet or something.  Apparently Apple should have actually made an appearance at CES and they wouldn’t have missed out on the Motorola XOOM which took home an award from every single tech publication on the planet.  But again, vapor here.

I’m sure he’s done the master proud though, and all of the investors on that earnings call today can hold their heads high as they prepare for the launch of the iPad Super Plus (our new name for it).

/me waits for the “You’re just bitter!” comments.

His comments in full after the break.

Q: What about iPad competitors?

TC: There’s not much out there as you know. There are two kinds of groups today (in the market) — the ones using a Windows-based operating system. They’re big, heavy and expensive. Weak battery life. Need keyboard or stylus. From our point of view, customers aren’t interested in that.

Then you have the Android tablets. The variety shipping today, the OS wasn’t designed for a tablet — but Google said this. So you wind up having the size of a tablet that’s less than reasonable. Or one that’s not even a real tablet experience. It’s a “scaled-up smartphone” – that’s a bizarre product in our view. Those are what is shipping today. If you do a side-by-side with an iPad, some enormous percentage are going to pick the iPad. We have no concern there.

In terms of next generation. There’s nothing shipping yet. So I don’t know. “Today they’re vapor.” However, we’re not sitting still. We have a huge first-mover advantage. And a huge user advantage from iTunes to the App Store. Huge number of apps and an ecosystem. We’re very confident entering into a fight with anyone.