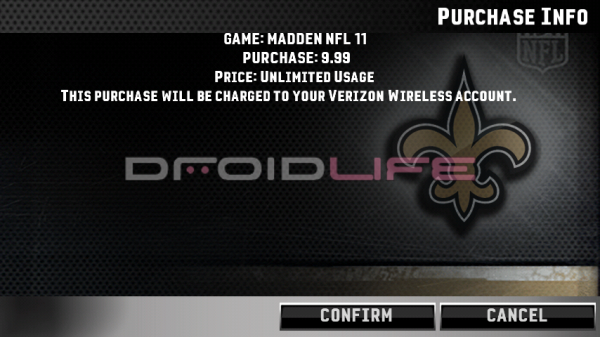 As readers of this site, you already know that the 2.2.1 update which will be available to all Droid X in the next few days includes the first version of Madden 2011 on Android.  We’re not all that surprised that it will make its debut on the DX since we know that Verizon has a major relationship with the NFL, but we thought you should know a little something about the game itself.  The pre-loaded version that comes with the update is as you may have expected, a demo version and as far as I know, will only let you play a half of football.  If you want to upgrade to the full version though, it’ll cost you $9.99 and will be charged straight to your Verizon bill.  I’m actually a little surprised that it won’t cost you more than $9.99.

I haven’t had a chance to dive into it completely yet, but from what I’ve seen, the game looks pretty stellar.  We’ll hopefully have some video up in the morning for you all to check out.