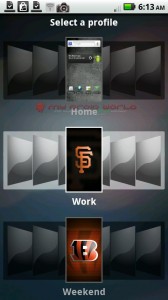 You are looking at screenshots from a Droid 2 running an updated version of Blur that appears to include “Profiles” like we’ve seen on the Droid Pro, tethering which is always removed before release, and that ugly stock Blur launcher seen only on low end or non-DROID branded phones.  We have no idea when this update could come or if it ever will, but it gives you an idea as to what Motorola is working on anyway.  Seriously though, the tethering will be gone and we can only hope that the launcher gets skinned in the near future.

What I want to know though, is if anyone is into “Profiles”?  For those not familiar, “Profiles” are similar to HTC’s “Scenes” as an easy way to switch your phone settings between work and play.  Personally, I’ve never used them on my Incredible, but wanted to know if anyone else does?

Via:  My Droid World