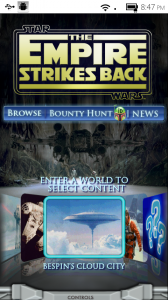 Verizon informed us that the Star Wars Empire Strikes Back app was scheduled to be released on 10/4, but it looks like they had a slight push back to 10/5 as the app is now available in the Android Market.  Well, for “select” Verizon Android phones that is.

The release of this app comes just 7 days after the R2-D2 Droid 2 launched and also celebrates the 30th anniversary of the Star Wars saga.  We haven’t heard numbers yet, but you can still order the special edition D2 online, so we’re only going to assume that the device didn’t quite sell as expected.  Maybe the release of this app will get the Star Wars fanboys excited?

You can find the app for free under the Verizon section in the market, but will cost you $2.99 after download to unlock certain featured content such as the live wallpapers, widgets and sound boards..  I should also mention that the $2.99 will be charged to your bill and not through the normal Google Checkout procedure.

Here are some of the features: