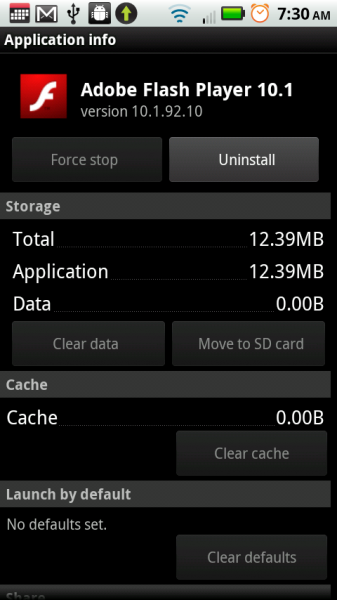 Adobe announced last night that a security flaw in the latest version of Flash 10.1 for Android has been found and a fix is in the works.  If your version looks like mine in the screenshot above reading “V10.1.92.10” then you have the newest version which they are referencing.  The flaw was discovered as hackers were actively using an exploit on Windows machines running Flash 10.1.82.76, but to cover all bases, Adobe plans on issuing a fix to all of their platforms.  By the week of September 27, 2010 they are hoping to have the fix ready for consumption, but yeah, that is almost 2 weeks away.  If you are feeling uneasy about that period of time, feel free to simply uninstall it.

Full info can be found at Adobe’s site.