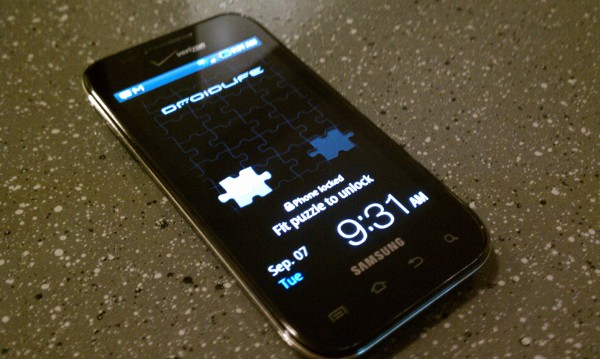 As the newest Android phone to land on Verizon, the Samsung Fascinate has to compete directly with the Droid franchise which as you may have expected, sparked our interest immediately.  There is something exciting about seeing the next batch of Android devices on their quest to not only drive this mobile OS, but to bring a level of competition that forces manufacturers to continue to innovate and push technological boundaries.  Did the Fascinate do all of those things? We’ll find out.

Before you read the full review of the Samsung Fascinate, you may want to check out our unboxing video which gives a nice walkthrough of the device’s exterior, plus a brief hands on with its TouchWiz custom UI.

The Samsung Fascinate doesn’t disappoint in look and feel, but the custom OS skin, lack of Google experience apps and Android 2.1 are a pretty substantial turn-off at this point.  We understand that the phone will get Android 2.2 someday, but until then we’re not ready to adopt our new Verizon Android relative.  Like I said, the phone doesn’t disappoint in some aspects, and it will surely fit the niche of users looking for something slightly different to that which accompanies the “Droid” name.  And while I’m not about to call this device anything less than a winner, I’m just not ready to put it up there with the Droid X or Incredible.  It has an amazing screen and specs to put many phones to shame, but it’s just not ready to play with the big dogs until it gets one major OS update, a Bing removal and a LauncherPro installation.

And stay tuned later this week for the Droid 2 vs. Droid X battle!