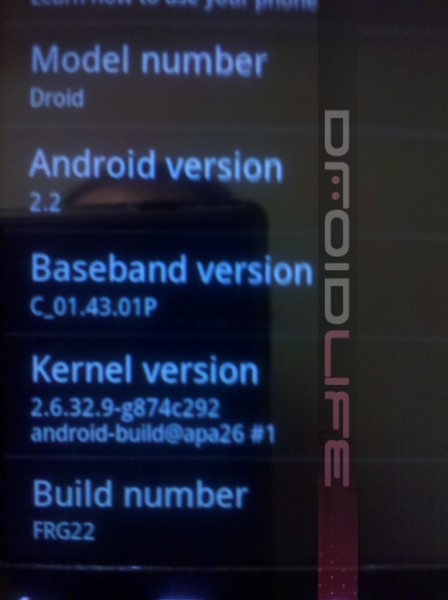 Rumors have begun to fly around the dark tunnels of the interwebs (here and here) that the FRG01B Froyo update for the Motorola Droid has been halted due to unnamed bugs.  Seems odd right?  You’d think that pretty thorough testing had been done before they decided to start launching this puppy.  Right?

On a related note, you may recall the leaked FRG22 Froyo build for the Droid that we posted this morning which definitely came as an extremely interesting surprise.  Why would Motorola and Verizon be pumping out new builds if the OTA is rolling out and confirmed as FRG01B?

Well we just received this screenshot in an email from a reader and could potentially help clear up all this confusion (or compound it).  He claims to have received FRG01B, only to be prompted immediately after with a “security patch” which was about “1.6mb” and took him to build FRG22.  Did that make sense?

Time to start cracking on Google servers for the file!

Update: I should add that if you updated to FRG01B yesterday manually, you are fine.  There is almost 100% chance that a file will be available to upgrade you to whatever the new build is should this whole story be true.  This happened to the Nexus One 2-3 times during its Froyo update.