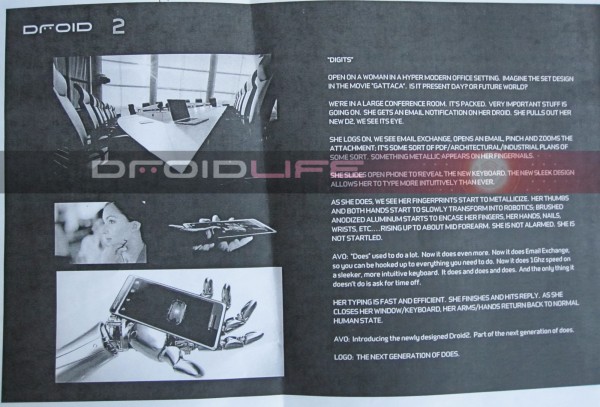 Over the weekend we got a hold of the commercial slides and scripts for the new batch of Motorola Droid 2 and Droid X commercials that are slated to run as we get closer to launch next month.  After reading the scripts on these slides, you get a great feel for the level of power plus the new user experience you can expect from these 2 devices.  You should really be excited after reading these.

First up is the slide at the top of the post and is the new commercial called “Digits”, made specifically for the Droid 2 (or D2).  The biggest details we get from this appear to be its newly found grasp of Email Exchange, the upgraded keyboard and a 1.0GHz processor.  Yep, the same 1.0GHz processor our initial source mentioned back in April.  Here is the voice over part of the script…

“‘Does’ used to do a lot. Now it does even more. Now it does Email Exchange, so you can be hooked up to everything thing you need to do. Now it does 1.0GHz speed on a sleeker, more intuitive keyboard.  It does and does and does. And the only thing it doesn’t do is ask for time off.”

Does 1.0GHz  change your mind on the Droid 2?  It definitely helps ease mine.

Two more commercial slides for the Droid X after the jump!

The second and third commercials were made to promote the Droid X, its 4.3″ display and a new multimedia app which we can assume is a part of the new Moto/Shadow/Ninjablur that has been rumored to be included in all new Motorola Android devices…

First up is the “Eagle Eye (NFL App)” commercial which talks specifically about the device’s 4.3″ screen and its ability to watch the NFL on the go in unbelievable quality.

And lastly, the “Media Mogul” commercial.  In this commercial, a new EyeCon app is highlighted and apparently will come standard with the Droid X and allow you to manage every multimedia device in your entire house.  A mobile media center as your smartphone?  Sign me up.

Now obviously these could have been commercials that received the axe, but my gut is telling me that these have made the cut and will be hitting the airwaves in no time.  I love the “Gattaca” feel that they all seem to be focused on and the features mentioned should help sell a ton of both devices, especially with the “Droid” tag slapped on them.  Yay July release!

Can Verizon or Motorola announce these already?