Google has made the Pixel Feature Drop for March official, with everything it contains rolling out starting today.

The highlights include Dark Theme automatic scheduling, advanced Do Not Disturb rules based on your current WiFi network and/or physical location, new emoji, a play/pause gesture for Motion Sense, and plenty more. If you own a Pixel device, it’s all good stuff.

You can view the full list of what’s new below.

One thing I’d like to point out is the “easier access to your cards and passes” via the power button. This is clutch, since accessing Google Pay was not quite as easy as accessing Samsung Pay on a Galaxy phone. A gif of this function can be seen below. I love it already.

According to Google’s post, other updates include improvements for adaptive brightness and more video calling features for Pixel 4 users using Duomoji. And to cap it off, Live Caption is rolling out to Pixel 2 users.

Here is the breakdown of features and which phones they are going to: 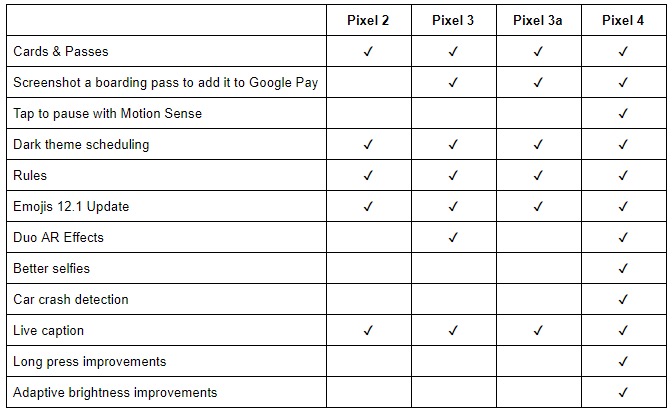