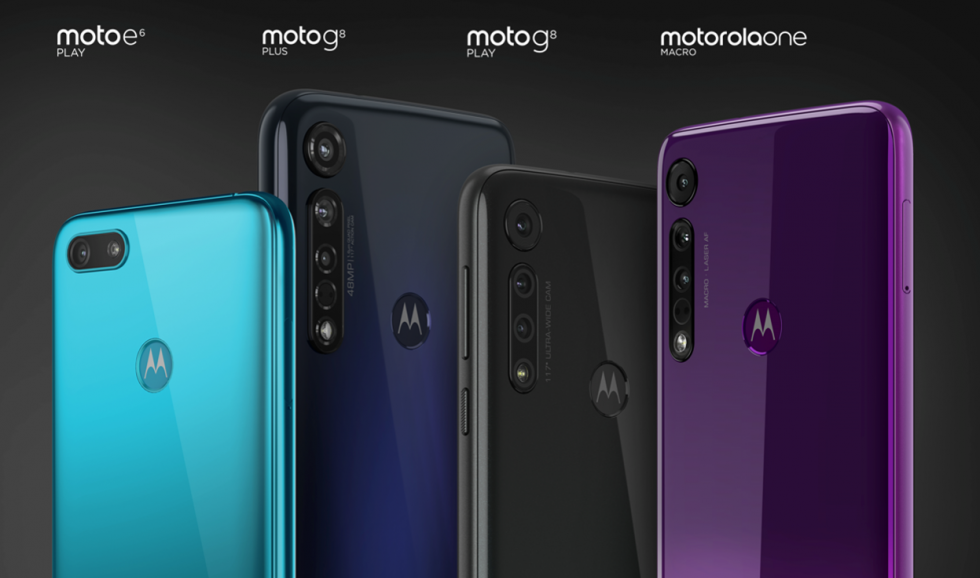 It might be my job to keep up with phone releases from familiar names, but even I’m having trouble these days figuring out the differences between Motorola’s mid-range offerings. That’s only becoming more difficult after the company announced four new mid-to-low-range phones today, the Moto G8 Plus, Moto G8 Play, Motorola One Macro, and Moto E6 Play.

At this point, none have been announced for the US, so if you want to skip this post, I won’t be mad. However, I’d imagine the Moto G8 will be here eventually and you may as well hear what it’ll have to offer.

For the new Moto G8 line, Motorola is calling it their best ever. Let’s breakdown what each offers.

That triple camera setup consists of a 48MP main shooter with pixel binning down to 12MP, 5MP depth sensor, and a 16MP action camera (like a built-in GoPro) with 117° field of view.

The Moto G8 Plus comes in Cosmic Blue or Crystal Pink.

The Moto G8 Play is similar to the Plus, but with a number of downgrades. First, its 6.2″ display is only HD (720p), it only has 32GB storage (microSD slot) and 2GB RAM, the processor is a MediaTek Helio P70M, and the front camera is 8MP. The triple camera setup on the back is made up of 8MP ultra-wide, 13MP main, and 2MP depth sensor.

As the name suggests, this Motorola One family member has a macro lens that takes pictures as close as 2cm. According to the specs, the macro lens is only 2MP, while the main shooter is 13MP.

The Motorola One Macro comes in Space Blue or Ultra Violet. It’s available today in Brazil, Mexico, Australia, India and throughout Europe with a starting MSRP of 199 € EUR.

The Moto E6 Play comes in Ocean Blue and Steel Black. It’s available today in Brazil and Mexico followed by Europe at the end of November for 109 € EUR.