If there is a company out there in dire need of a New Year, New Me campaign, it’s HTC. Monthly revenue data for 2018 is now public, with most of the industry shaking its head and wondering how this company keeps the lights on.

For numbers, I’ll give you just a few to paint a startling picture. In total, HTC brought in just 23.74 billion TWD ($770 million) in revenue over the entire year. According to TechCrunch, that’s the first time it has grossed less than $1 billion during a year as a public company. And compared to 2017, that’s a massive 62% drop, further confirming that we’re a long way from when HTC was one of the hottest smartphone makers on the planet.

Total loss for 2018 is not yet known, but when the last three quarterly reports are combined, a total operating loss of 11.13 billion TWD ($361 million) is what you’re left with, with one more quarter to add.

Words aren’t doing it for you? How about two charts, courtesy of TechCrunch. The one on the left shows revenue levels dating back to 2005, while the chart on the right shows monthly revenue levels back to February, 2017. 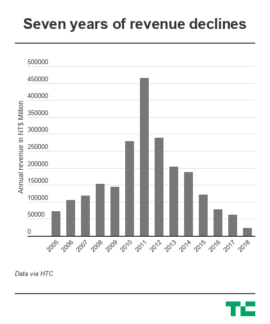 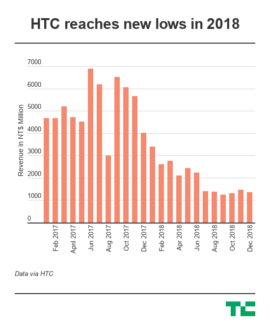 To put HTC’s fall into perspective, it made more money during a single month in 2013 than it did the entire calendar year of 2018.

Needless to say, I don’t think we’ll be writing anymore “I’m excited for HTC” posts for a while.