A photo published by a reputable source for all things Motorola may be providing our first look at what is in store from the Lenovo subsidiary in 2016. As we can see in the shot, it’s a smartphone with the trademarked “M” logo in the top corner, the same marking we have seen countless times in previous leaks surrounding Motorola devices.

The photo appears to have been taken during a commute on a subway train or bus, with the owner working diligently on a laptop computer, unaware that his smartphone and actions are being photographed. If I had to take a guess, this photo was taken in Chicago, where Motorola’s HQ is currently based in the US. We can also see a scene from a movie or TV show, featuring an actress I am unfamiliar with, but that’s beside the point. 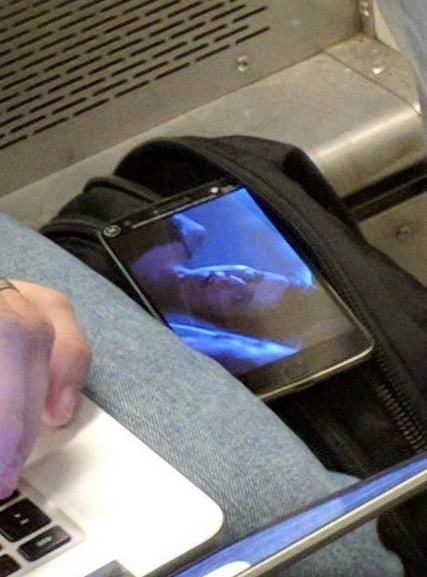 Now, it’s been said by past Moto execs that the well-known “dimple” on the backside of Motorola phones was originally intended to be for a fingerprint reader, so if in fact the company has decided to move it to the front, like it is on the Galaxy S7 and upcoming HTC 10, that’s a shame. In our view, having the reader on the backside is a much nicer experience, thanks to the ease of using your index (pointer) finger to do the unlocking, such as it is on the Nexus 6P and Nexus 5X.

This is our first actual discussion on what to expect from the Moto team in 2016, so please, now is the time to share your hopes and dreams about what we might expect from Lenotorola or Motovo or whatever you want to call it.