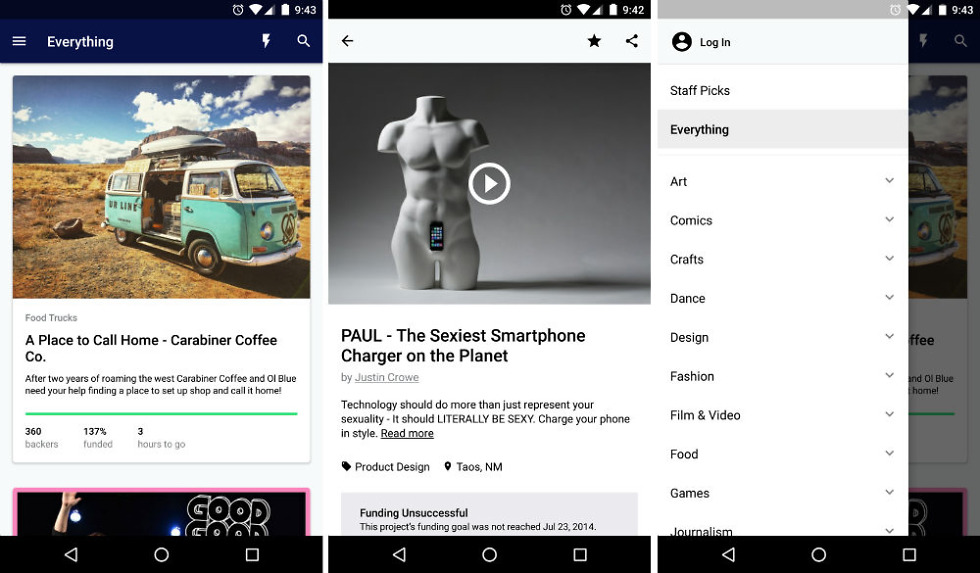 On the verge of being almost too late, Kickstarter has launched an official Android application onto Google Play. I say almost too late because, you know, Kickstarter is sorta lame these days, am I right? Back in the day, a few interesting ideas would pop up here and there, but now it’s nothing but folks looking to fund food carts and PC games. But hey, that’s just my opinion.

Anyway, if you don’t already know, Kickstarter is a crowdfunding platform that has been helping people fund their ideas that a traditional bank or investor would never touch. Over the years, Kickstarter has given us a few cool products, but it has also given us a ton of crap. And now, finally, an Android app can navigate you through the world of crowdfunding.

With the app, you can browse the latest projects available for funding, Editor’s Picks, search through individual project categories, login to check the projects you have backed, and also keep up with the folks you follow on the service. The app seems stable enough, built with a few Android touches, but really, this app seems to be a couple years late to me. I recall my buddy showing off the Kickstarter app a few years ago on his iPhone, so I don’t know why Android development took so long. Hey, maybe they should have made a Kickstarter to help fund the developers.

If you want to browse the latest and greatest ideas to hit Kickstarter, follow the Google Play link below.