Did you ever think Verizon or AT&T would re-introduce unlimited data to this wireless world of ours? I can’t say that I saw it coming this soon, but AT&T is the first of the two to decide that overpricing the hell out of data for years was probably unnecessary. This morning, AT&T announced the “New Unlimited Plan” for AT&T customers who also “have or add” DIRECTV or U-Verse TV. The new plan is available beginning tomorrow, January 12.

Yes, that is the important qualification here. This unlimited plan isn’t for everyone – it’s only for those who also plan to use one of AT&T’s cable services too. So as long as you already have or plan to add DIRECTV service, or AT&T U-Verse, into your monthly billing schedule, you can ignore this and move on with your day. If you do use (or plan to) one of those TV services, then read on!

The AT&T unlimited data plan starts at $100 per month. The break down there is a $60 fee for the data and another $40 for the device access. If you add one additional lines, you are looking at just $40 more per line. For now, AT&T is tossing in the fourth line for free, so you could have a family of four on AT&T’s new unlimited plan for $180 per month (before taxes and all that jazz). It is my understanding that you can add more than four lines, but only the fourth is free.

The plan includes unlimited “video streaming, data, talk, and text,” in case you were wondering.

Here is a breakdown of the base plan, plus additional potential costs, depending on the devices you add:

What are the catches? Well, we’re still talking with sources, but we know these things.

Finally, here is a competitive pricing breakdown that AT&T is pushing. 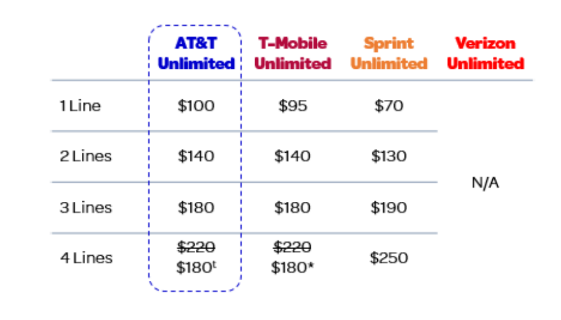