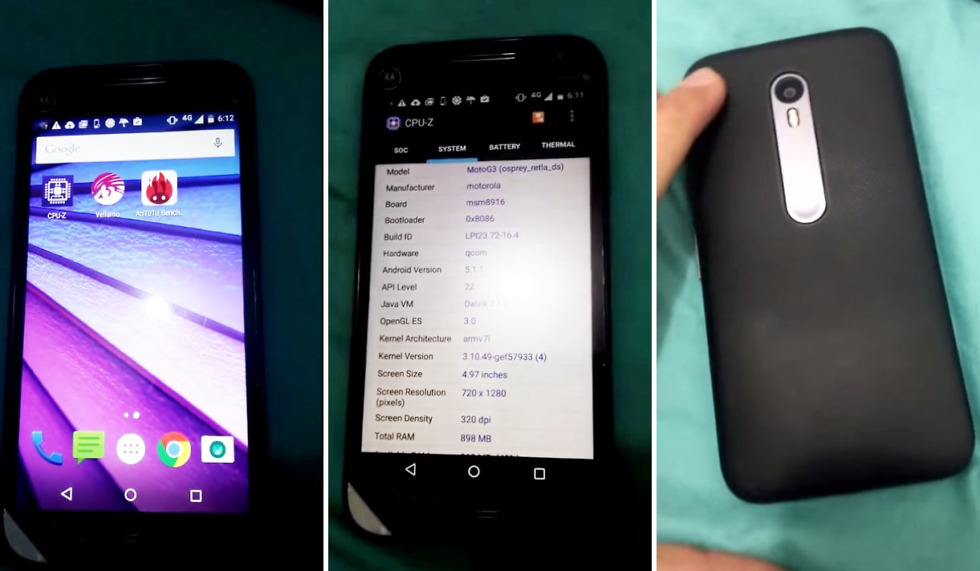 Over the weekend, a random leak of what appears to be the new Moto G (3rd gen) showed up in a 2-minute video and series of pictures. The unit made public is clearly an engineering test model that lacks most Motorola branding, but does have all sort of identifiers to help Motorola track down whoever’s unit this was supposed to be.

The video shows, through a variety of benchmarks, all of the phones specs, along with the shape that the phone may take on when it’s finalized. According to this video, we are looking at another 5-inch 720p display, Snapdragon 410 (MSM8916) processor, 1GB RAM, 13MP rear camera, 5MP front camera, Android 5.1.1, and LTE connectivity.

It looks, well, a lot like last year’s Moto G only it has a redesigned back panel that features a silver panel that houses the Motorola dimple, camera, and flash. We have seen this same shape leak in purported pictures of the new Moto X (3rd gen) as well.

Assuming Motorola sticks to the same Moto G formula as it has for the past couple of years, this phone should be well-priced at under $200.

This phone will likely launch around the time of the new Moto X.