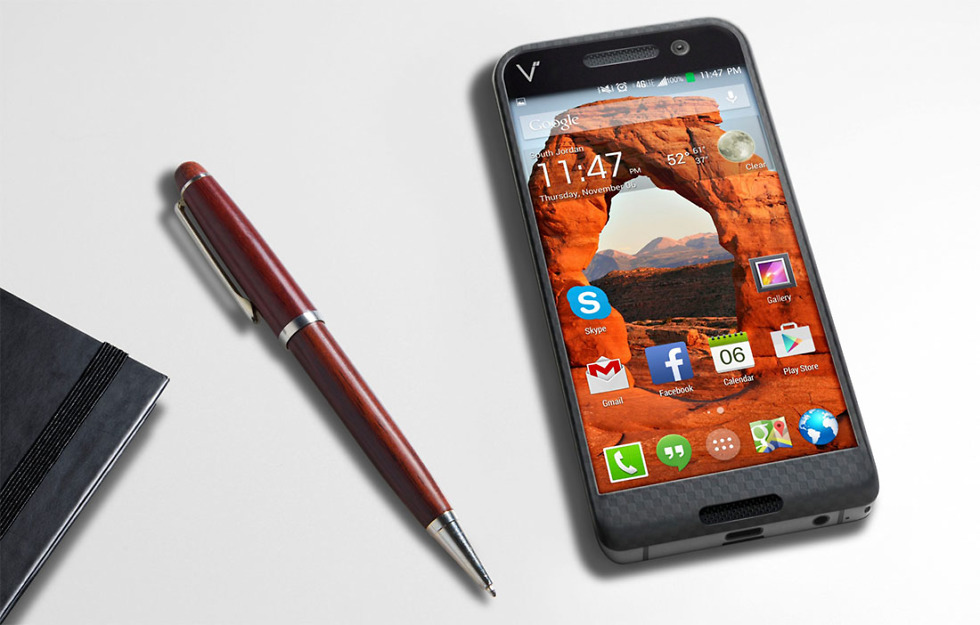 Saygus and its supposedly-existent, oft-delayed “world’s most advanced” smartphone, the V2 (or V-SQUARED), stopped off in early buyers’ inboxes this morning to update everyone on potential shipping times. Well, that’s being optimistic, as the email dances around virtual mailboxes with talk of “two SIM cards!” and “Android 5.1!” before “grumble grumble grumble…we’ll ship soon!”

The email specifically states that we “are approaching time for you to receive your V-SQUARED and will notify you of your shipment soon!” There is also a mention of a production partner change that was supposedly shared with us, though I don’t recall anything about such a major change in the last delay email. All I remember was something about “quality assurance and network testing,” not completely switching to a new partner to manufacturer the phone. Hey, who’s keeping track of such details?

The email was also used as a means to announce a new Indiegogo campaign to fund future sales of the phone or as “another vehicle to let people know about” it or something. That campaign is now live. While we typically crack jokes about Indiegogo campaigns, this one might actually prove to be useful. If you scroll down to the bottom where it says, “The Plan,” we may now know exactly when these phones, that were supposed to ship in March, will actually ship. According to the V-2’s Indiegogo campaign, which somehow has 1,431 backers in 22 minutes time (and how is that possible?), we are looking at a “Fall 2015 shipment.” Yep, this schedule says that they essentially took everyone’s early adopter money to finally manufacture a real prototype, then spent three months dealing with partners who could make it, and will take June and July to “finalize tooling” before ordering parts. In August and September, they will test the phone and then ship it at some point in the Fall. So we have gone from March to “Fall.” Awesome.

To add to the awesome story of the Saygus V-SQUARED, a separate email – sent moments before the hardly-informative shipping email – invited early buyers to a 2-day VIP party at E3, hosted with your funds by the Saygus founders! Yeah, bruh! Party with the Saygus founders and YouTubers at E3 in a swanky penthouse!

Have you requested a refund yet? You probably should.

Update:  This whole thing is hilariously sketchy. It’s pretty obvious that they took their 1,400+ backers from January and talked Indiegogo into letting them add them to this campaign to make it look like they had instantly taken in $800,000+ in a matter of minutes. All of the backers are listed as “Anonymous” and were added two days ago, before the campaign was even live. The campaign is also, of course, a “flexible funding” campaign. In other words, Saygus gets your money even if they never get fully funded or actually create the “world’s most advanced phone.”

Update 2:  Saygus says via Twitter that their “loyal pre-register customers” will get their phones prior to the Indiegogo campaign timeline. They are also claiming that the phone will ship with USB Type-C, except that the campaign makes no mention of it. 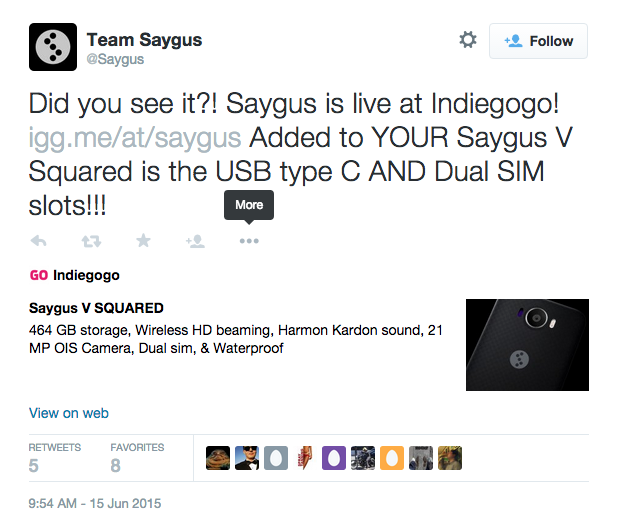 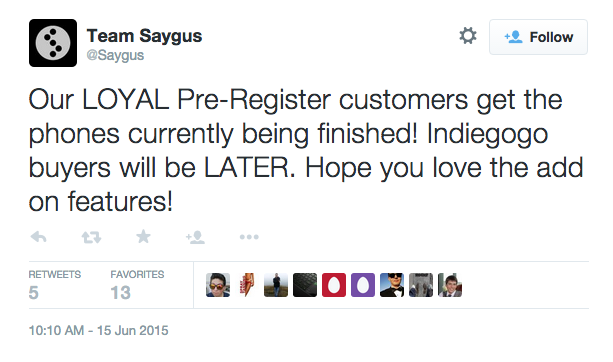