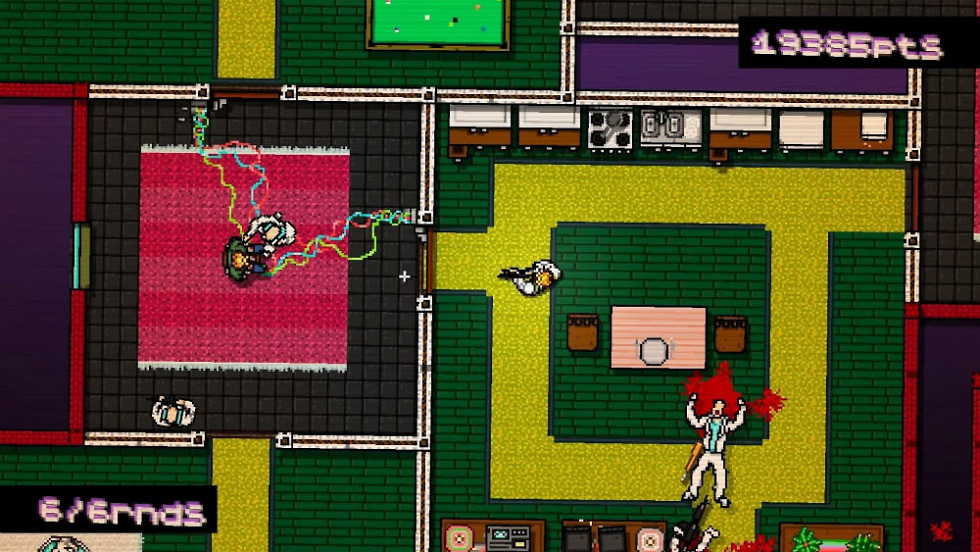 Launching alongside SHIELD, NVIDIA’s Android TV set-top box, Hotline Miami is currently my favorite game for the Android TV platform. To play the game, a controller is needed as you assume the role of an antihero who battles Miami’s underworld of crime lords in the late 80s. As you will quickly find out, your thinking cap will come in handy, as you must plot out the best way to clear buildings full of baddies, and needless to say, this game isn’t rated “Mature 17+” for nothing.

Players can choose whether to go in guns blazing, as there is a very large arsenal for you to choose from. You can pick up shotguns, machine guns, machetes, and even beer bottles to hurl at your enemies. Although, I choose the more stealthy approach, waiting for thugs to walk past me, then blindsiding them with a baseball bat to the face. It helps keep the dogs and other enemies from being aware of your presence.

The game probably won’t win any awards for insane graphics, but that is part of the charm. It reminds me a lot of the old, top down scrollers, such as the first Grand Theft Auto game. If anyone here was a fan of the movie Drive, then the soundtrack featured in Miami Hotline will make you very happy, as it really helps set the mood while you are murdering and getting blood all over your clothes.

Do note, this appears to be an official port of the PC game, but thanks to its developers, the controls through a dedicated controller are amazing. And if you have a Fire TV or Fire TV Stick, you can find it on Amazon as well, instead of Google Play.

Priced at $4.99 with zero IAPs, this game has my official seal of approval.