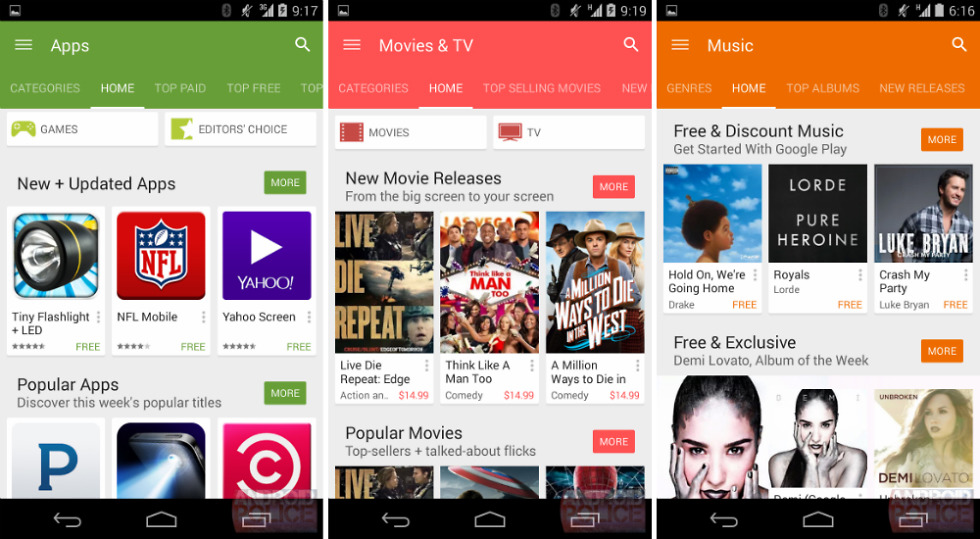 Thanks to the folks over at Android Police, this could be our first up-and-close look at the upcoming version 5.0 update for Google Play on Android. In the update, Google looks to outfit its mobile app store with its recently announced Material Design aesthetics, which were a highlight at this year’s Google I/O in San Francisco.

In terms of what looks new, the only real change is the huge amount of bright colors Google is throwing into the top of categories. As it is right now on most Android devices running Google Play, the top bar is colored in, but each separated category is set to a gray backdrop. With this update, even the categories are receiving the bright-color treatment.

With another update that was quite recent, Google began reworking the layout of listings, but this upcoming update does not appear to be too much in the retooling department. While minor changes will be present, it seems as though a few color tweaks are really what is in store for users. However, we won’t know exactly what to expect until Google drops the update.

One major change that might come in this update is a more comprehensive restoration process for devices. From what examined strings of code show, users may be able to restore phones and tablets on a per-device basis. In layman’s, if you use both Android phones and tablets, you will be able to restore a select profile which features the apps + data you would want on those individual devices, not just a general hodgepodge of apps you have previously downloaded. In the long run, it should make for the restoring of phones and tablets much easier for users.

As of right now, there is no time frame for this update to be released, but with it being detailed so highly, it should be soon.

Ready for the materialing of all things?