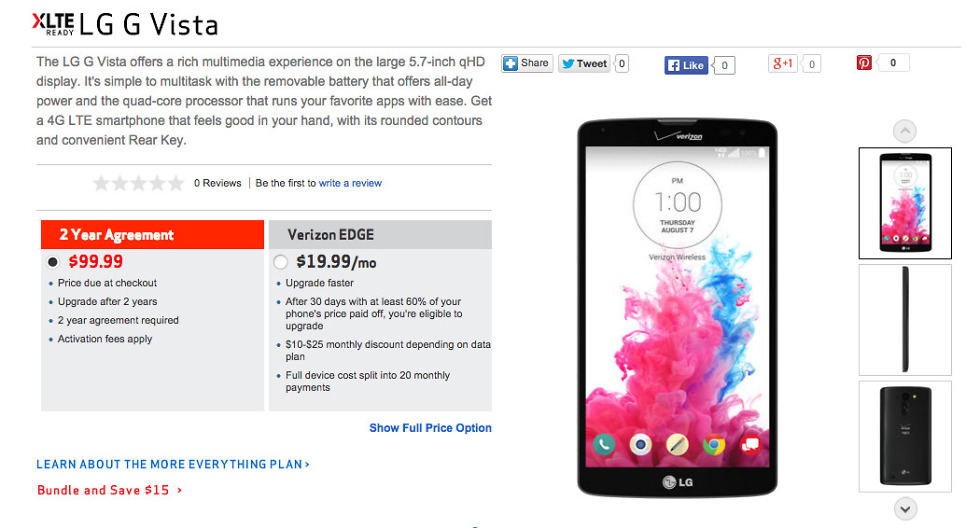 Verizon has quietly gone ahead and made the LG G Vista available for order through their web store. For those not familiar with the G Vista, this is LG’s mid-range and affordable, yet oversized phone that sports a 5.7-inch display. We outed the official specs, price, and release date yesterday, but are still somewhat surprised that Verizon is already selling the phone without ever having mentioned it publicly.

In terms of specs, as I just mentioned, the G Vista isn’t going to blow you away like the LG G3 did. It sports a 1.2GHz Snapdragon 400 quad-core processor, 1.5GB RAM, 8GB internal storage, micro SD card slot, 3,200mAh battery, 8MP rear camera with laser autofocus, 1.3MP front camera, and runs Android 4.4.2. The display measures in at 5.7-inches, though there is some confusion as to the official resolution. Verizon’s website seems to think the resolution is only qHD (960×540), yet our official specs from yesterday on LG marketing cards called it an HD panel with a resolution of 1280×720 and 258ppi. I’m going to stick to our specs and assume that Verizon’s site is wrong for the time being.

Update:  As expected, Verizon had the specs wrong on the G Vista’s sales page. Our specs were right – the device has an HD (720p) display, not a qHD display.