We first reported that a Galaxy S5 Developer Edition for Verizon was on its way after a listing for the device went live on Samsung’s site back in early April. Unfortunately, we had no information to provide on when the phone would be available, but assumed it would only take a couple of weeks. Over the weekend, the “Coming soon!” sign changed to “Add to cart,” meaning it’s now available.

For $599 off-contract, the tinkerers in the building can pick-up Samsung’s 2014 “regular” flagship phone as a Developer Edition. The phone should come with an unlockable bootloader, giving you the freedom all Android phones should include out of the box, but don’t, because carriers and their partners loathe you. OK, that’s somewhat of an exaggeration, but you know what I mean.

The listing for the phone is a bit odd, though, as there is no price listed until you add it to your cart. Once in your cart, you can see the full $599 price, along with a mini-questionnaire about your developer ways.

The phone is exactly the same as the model sold directly through Verizon stores in terms of specs, the only difference is again, that unlockable bootloader. 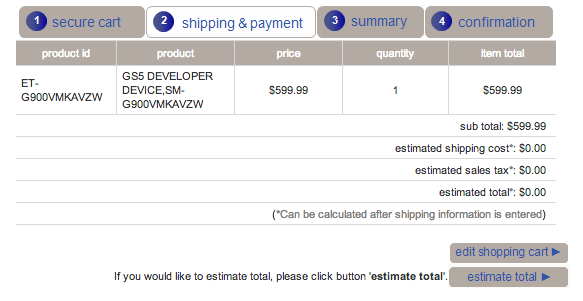