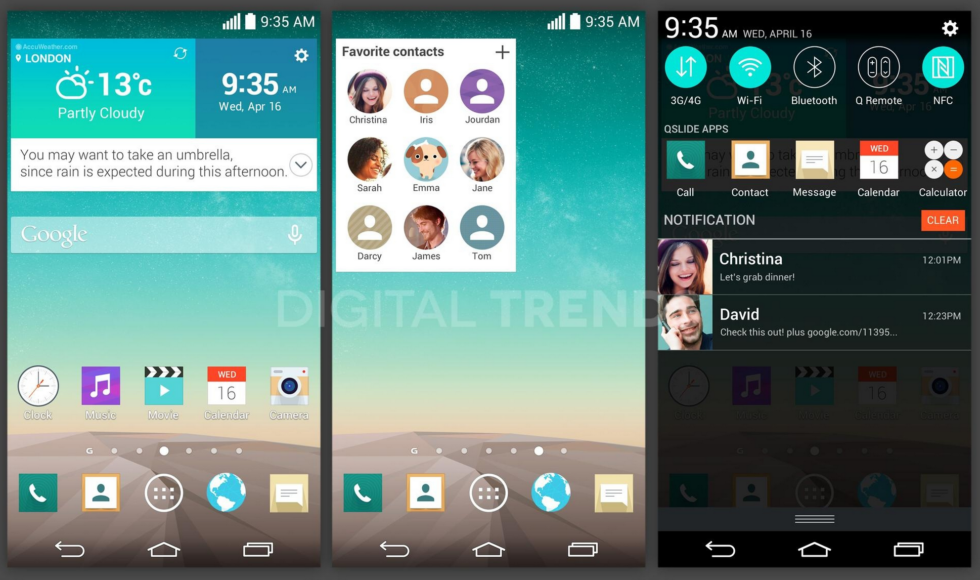 It is nearing the end of April, and we have already seen two flagship devices from HTC and Samsung. However, it seems that more than ever, the public is eagerly awaiting what LG will unveil to compete against the One (M8) and Galaxy S5.

The LG G3 is by no means a complete mystery, as we have already seen multiple leaks over the past few weeks. Today, we have another look at the reported flattened UI, and possibly a few new features for the upcoming device.

In this latest leak from Digital Trends, we get to see more than just the home page of LG’s updated user interface. A sneak peek into what some of the widgets will look like, and even a glance at the menu settings is included in today’s leak. Once again, these leaked photos show the updated flattened look that LG is working to push to their upcoming devices. These screenshots also come in at the 2,560 x 1,440, which seems to confirm earlier reports of the QHD display.

These three screenshots also show LG’s answer to Apple’s Siri, Google Now and Microsoft’s Cortana, which is reportedly being called, for the time being, the “Concierge.” The homepage features a widget that is suggesting to its owner to take an umbrella, because it drew information from AccuWeather that reported there was rain in the forecast.

Sources to Digital Trends state that the suggestions will go even further than Google Now, which would be quite exciting if it ends up being true.

It is hard not to get more excited for the G3, as more leaks keep pouring out.