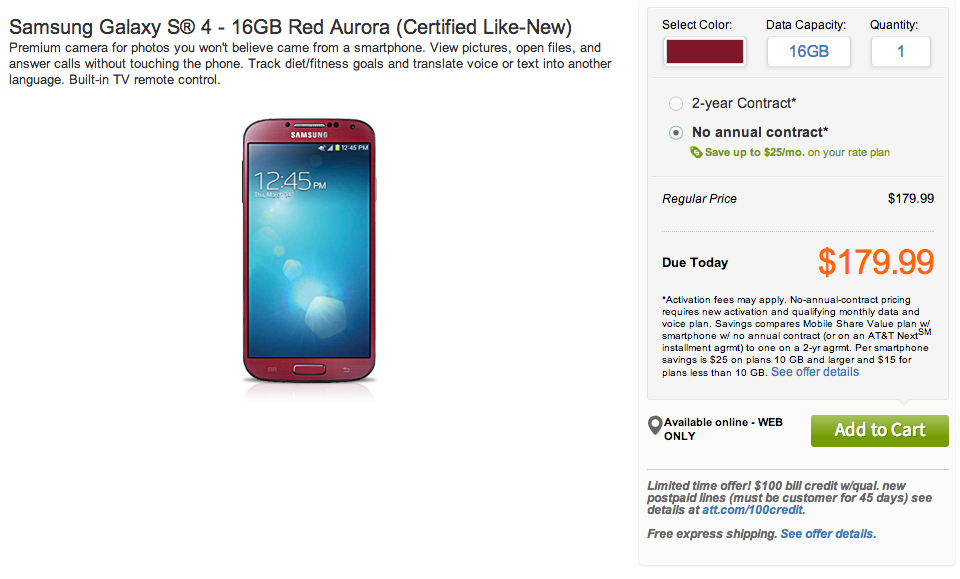 Over the weekend, many of you took advantage of AT&T’s “certified like-new” Galaxy Note 3 sale, which had the device listed for $249 without a contract. That’s completely insane, in terms of deals. We initially thought that the price was wrong, but it held up all weekend and is still there, though the device in either black or white is unsurprisingly sold out. If you missed out, don’t worry, there is another deal going on that’s just as good for the Galaxy S4.

AT&T has their version of the Galaxy S4 listed as “certified like-new” for $179 off-contract. The device is sold out in black, but is still available in both red and white. The device typically sells for $199 on-contract, so to see it drop below that price with no contract attached is simply, incredible.

These devices were obviously, previously used, but “certified like-new” at least sounds like they have been brought back up to “like-new” standards. And for $179, how can you beat it, even if it is last year’s Galaxy S? If you ask me, the Galaxy S4 feels a hell of a lot better in hand that this year’s Galaxy S5.

A line of service is required, but commenters in the Note 3 thread will tell you exactly how to quickly cancel or work around it.