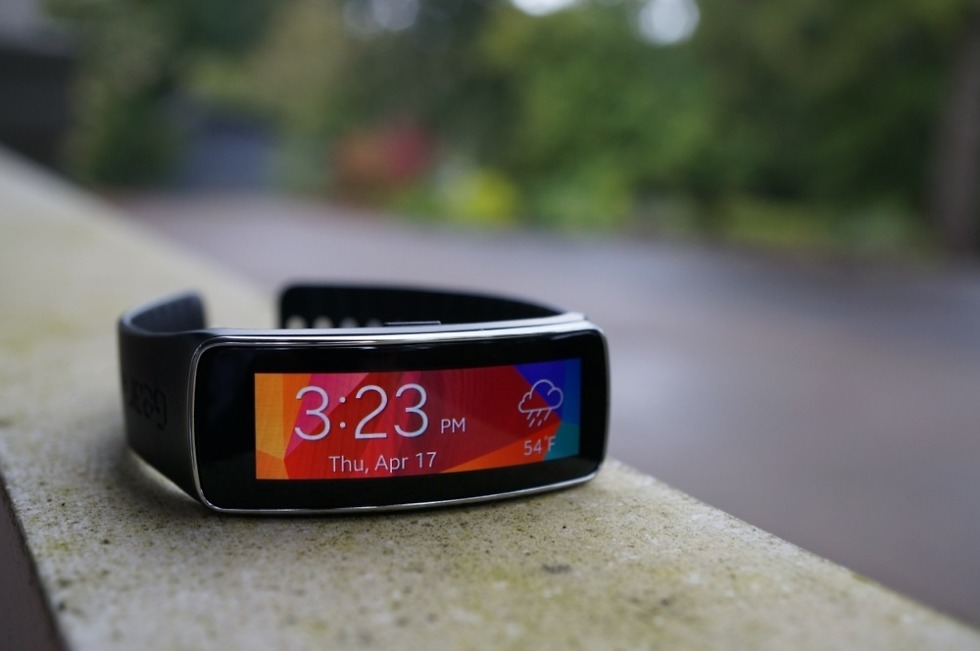 As you guys know, I’m kind of into the whole fitness band thing. I’ve talked about my dedication to Nike’s platform, including the Fuelband (which I recently retired). I’ve picked up random Kickstarter items like the Misfit Shine, all because I’m constantly looking for something to help track my fitness goals, which mostly includes speed and distance training with some strength exercises worked in.

When Samsung unveiled the Gear Fit during their Galaxy S5 launch event, I was actually somewhat excited – a fitness band, with a beautiful little AMOLED display, that works on Android, isn’t terrible looking, and doesn’t have single-day battery life. What’s not to like? I picked one up last week when it arrived in stores and have been using it daily ever since. I’ve logged 8 mile runs, shorter sprint workouts, worn it as a smartwatch, and even tried once to get it to track my sleep. In other words, I’ve tried to make this my daily fitness tracker and more, just like Samsung claims it can be.

With that said, I’ve got a ton of thoughts to share. Let’s talk about the Samsung Gear Fit. 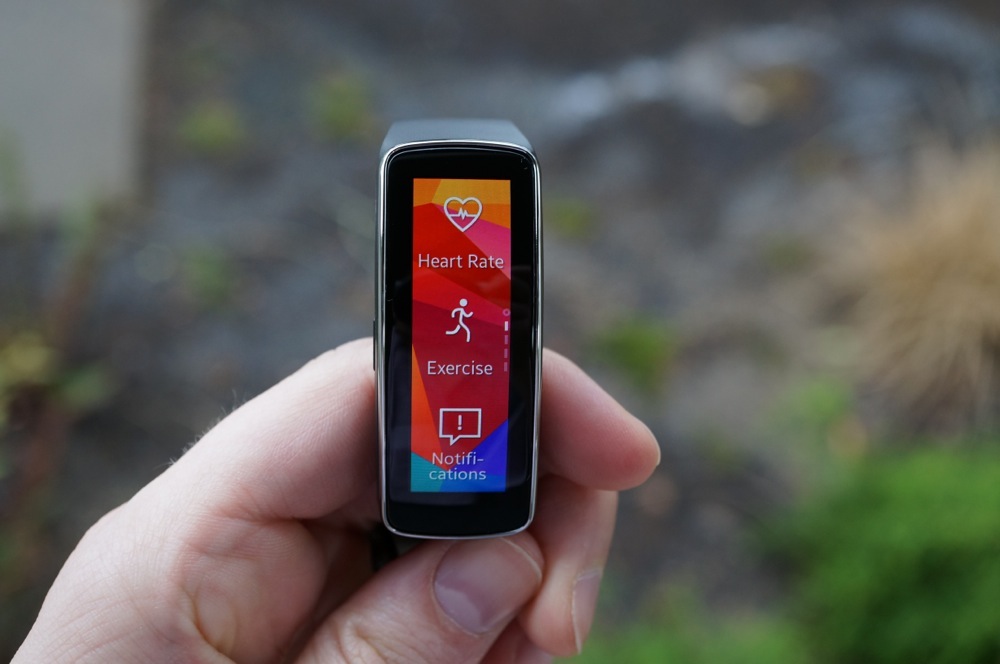 No, I’m not going to sugarcoat it. If you are looking for a fitness band or tracker of any sort, Samsung’s Gear Fit is not the one you want.

As I mentioned, I’ve taken the Gear Fit on at least four runs in the past week. While it doesn’t do a bad job tracking my pace or distance traveled, it’s the other little things that make it not an acceptable entry into the fitness world. For example, one of the major selling points of the Gear Fit is its ability to take your heart rate. And that option is actually very cool, depending on the type of training you are doing. Thing is, it can’t check  your heart rate if you have the Fit also tracking “Exercise.” I’m not joking either, look at the screen below. So basically, the exact time that you would want to check your heart rate, you can’t.

Update 4/17:  Buried in the settings of each “Exercise” category, there is a very last option that lets you check a box for constant heart rate monitoring. It’s not on by default. Nothing tells you to go look for this option, nor is there a hint at it existing. I say that, because there is a giant “Heart Rate” option in your available apps that would be the obvious choice to always check your heart rate. That option, as I previously mentioned and is listed below, doesn’t work if you are doing an “Exercise.” This is getting more painful by the minute. With that said, I will give the constant heart rate monitoring a test and update this post again if there is anything to report back.

Update 4/21:  So I used the constant heart rate monitoring during a 5-mile run. It’s, to put it bluntly, a half-baked experience. When you kick off a workout, the Fit takes your heart rate before beginning. Then throughout, it continues to monitor, though the results vary tremendously. I saw BPM at anywhere from 70 to 180 during the workout at various times. I’m not talking about my heart rate starting at 70 and then working up to 180, I’m saying that mid-run, it was dropping to 70 before jumping back up to 180. I called it “half-baked” because when in this mode, from what I can tell, it doesn’t record any of that heart rate info. What I mean is that none of the data is kept and then transferred over to your S Health app. So all of that 5-mile heart rate monitoring data is gone and no where to be found after the fact.

It gets worse. After every single workout that I’ve completed in the last week, I’ve tried to immediately check my heart rate, you know, since…you…can’t…while exercising (Edit: Or can if you find the impossibly hard-to-locate check box). The Gear Fit doesn’t work then either. Apparently, the heart rate sensor (the one that’s built into a fitness band) can’t detect your heart rate if you have any amount of sweat on you. In the photo below, you can see the error I’ve received at least a dozen times of, “The signal from your pulse is weak.” That would be my pulse which is pounding at over 150bpm from a completed workout, yet this little guy can’t sense it.

But it’s not only bad because of the faulty heart rate sensor. The Gear Fit also sucks because you can’t pause a workout. So if you are on a run, have to stop at a stop light or a train or need to go to the bathroom, you can’t pause anything. The only option you have while in the “Exercise” mode is to stop. And when you press “Stop,” it doesn’t pause, it actually keeps the timer going in the background until you also hit the check mark on the next screen to fully stop your exercise.

Want to use the Gear Fit as a pedometer? Well, don’t forget to turn that mode on. You see, the Gear Fit doesn’t track your steps by default, it’s an actual mode you have to turn on. Same thing goes for sleeping – if you’d like to track your sleep, you have to tell it to. But then, once it does and you also remember to tell it to stop tracking in the morning, that info goes…somewhere. There isn’t an area in the S Health app on the Galaxy S5 that shows you sleep info. You can view some of it on the Gear Fit, and will even tell you the percentage of the night that you remained motionless, but scrolling through multiple nights of sleep isn’t exactly fun on a small screen.

Update 4/17:  Today (of all days), Samsung posted a brand new app called S Health Sleep, that is a stand-alone app from the Samsung Apps store for tracking the sleep info you gather on a Gear Fit. This would have been nice to have during my testing (or at launch), but you know what, the fact that it’s a stand-alone app is another joke in and of itself. You now have to use three apps along with your Gear Fit:  Gear Fit Manager, S Health, and S Health Sleep. No thanks.

Finally, the display isn’t bad in direct sunlight when you are looking at the colorful clock, but with the all-black exercise screen up that shows small white text, it’s almost impossible to read while moving when outdoors. And that includes checking notifications as they come in during a workout.

So yeah, the “fit” part of the Gear Fit has been a complete disappointment. Sure, it could get better over time with updates from Samsung, but in it’s current form, I wouldn’t tell any fitness freaks to even consider it.

It’s also not a good smartwatch.

That’s right, it’s also not a good smartwatch. You can decline calls (not answer them), send a few canned messages in the stock text messaging app, get calendar reminders, and preview notifications from other selected apps like Gmail or Hangouts. When I say “preview,” I’m talking about how you can receive Hangouts messages, but you can’t respond to them. So the functionality there is pretty limited.

There are more issues if you are trying to read notifications that take up more than a single line. Whether you have the Gear Fit showing the display in portrait or landscape mode, there just isn’t enough screen real estate to make it worth attempting to read. Now, that’s not necessarily the Gear Fit’s fault, but Samsung added this functionality to make it somewhat smartwatch-y, when it probably shouldn’t have.

If you want simple notifications from select apps or the ability to quickly reject a call with a pre-set message, it can do that. The Gear Fit is not a full-blown smartwatch, though, in case you were hoping it would be.

It does have a beautiful display, though. The design isn’t bad either.

Yes, the Gear Fit does have some decent things going for it. The curved AMOLED display used is quite stunning to look at and something I can’t wait to see evolve. The colors pop, the viewing angles are great, and it doesn’t seem to suck battery like I figured it would. There are multiple wallpapers that really take advantage of the AMOLED display’s vibrant colors and a variety of clock faces, some with weather, others with calendar info, and a few that are just awesome clocks in general. The beautiful display will even react to an arm raise, so that you can view it and the time quickly without pressing a button. 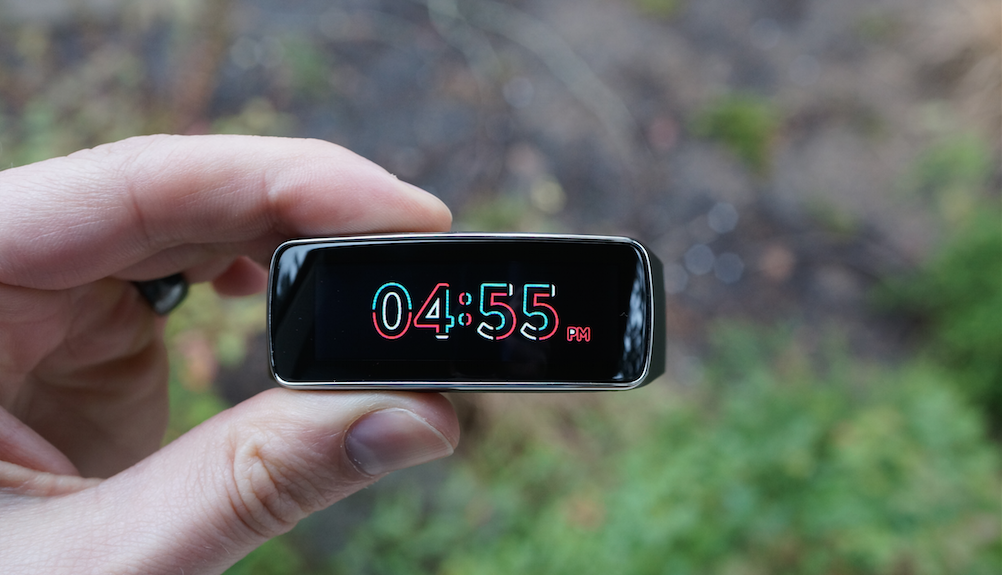 The overall design of the Gear Fit, I’d argue, is quite nice as well. For having a curved touch-enabled AMOLED display, and 3-4 day battery life, plus a heart rate sensor, it’s not all that bulky. There are changeable straps, so you could in theory change up the look to keep it fresh. Otherwise, it’s a subtle black band that will surprise friends once they see the vibrant display light up. 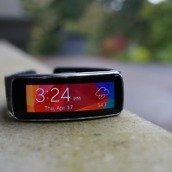 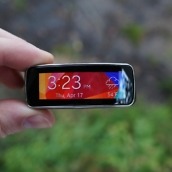 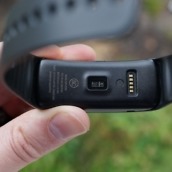 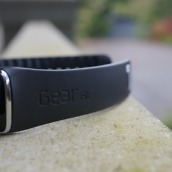 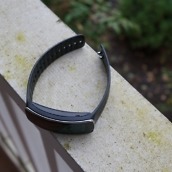 In case I didn’t make it obvious already, I won’t be recommending the Gear Fit to you. It has some really cool tech inside, like the AMOLED display, but the fitness side of things is far from being anywhere near where it needs to be. There are all sorts of little issues that Samsung needs to work out before fitness fanatics should consider this product. It’s also not powerful enough in the smartwatch department for techies to get excited. It was a decent attempt at something innovative. Hopefully, the next one gets it right.