Wirefly (and their parent company Simplexity) appears to have closed up shop within the last 24 hours. We received word last night from a reader who had recently purchased a DROID MAXX, yet had not received his device and could also not check the status on it. He took to their Facebook page, since their entire website had been taken down, and found comments from affiliates and other customers who were showing concern as well. A couple of replies from Wirefly to his inquiry about his order mention that the company has filed for bankruptcy and will be issuing a refund.

For those new to Wirefly, just know that they were a large online retailer of wireless phones that often sold them for rock bottom prices. I can’t say that we would ever recommend buying from them, but they were what they were. If you needed a cheap phone, were willing to read the fine print on their website, and adhere to their strict set of rules, then they were an option.

Here is the quick conversation our reader had with them: 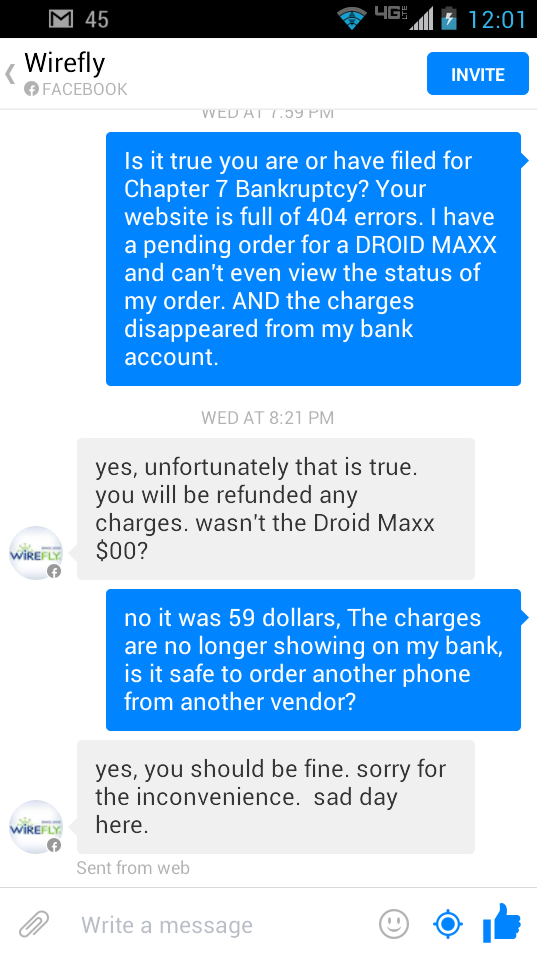 Their website is offline, as I mentioned above. All of their individual site pages are returning 404s and their contact phone numbers only say that they are currently closed when called. Of course, it’s now almost noon on a Thursday on the east coast, so you would think that a company who likely fills thousands of orders a day would be open.

A quick search of “Simplexity” on Twitter and Google+ returns results from recruiters and employees who are all apparently in mourning today. Mentions of the company closing down are there, even though nothing official has been announced. It sounds as if this came as a shock to all involved.

One employee had this to say:

Good morning, Simplexity Friends. Yesterday we suffered a shock and – let’s be clear – an injustice. Today we have to make our way in the world where that happened. So let’s talk about how we will do that.

If you recently placed an order, I wish you luck in receiving a refund. It could be a rocky road. Hopefully, you only paid a penny.

We have reached out to Simplexity for comment. Who knows if we’ll hear back.