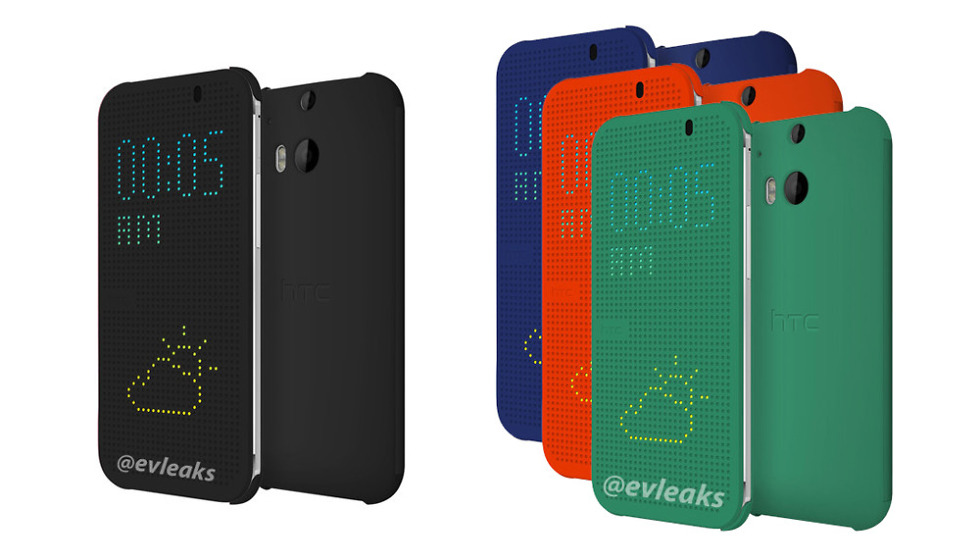 Thanks to @evleaks and his never-ending pursuit to leak all things “All New HTC One” or HTC One (2014), we are getting our first taste of the accessory line for the “M8.” He also mentioned the possibility of a new Google Play Edition of this 2014 HTC flagship.

In two images posted to his account yesterday, we are seeing a new flip-style case that comes in four colors:  black, red, green, and blue. The case stands out – or at least comes off as being unique – because of its hole-filled front sides. As you can see from the images, the holes are being used to show important information (like time and weather) with the case closed. We aren’t sure if the display will constantly show this information or if you’ll need to press the power button to see it. I’m not sure I see the point if the power button is required, though maybe this case can save battery life by only showing a minimal amount of display. It’s an interesting idea, I guess.

On a semi-related note, Evan also mentioned that we should expect a Google Play Edition of the “All New HTC One.” Since the original HTC One was one of the first GPE devices to help launch the GPE program (still available for $599), it would only make sense that HTC join the program again, assuming Google wants to keep it going. For those not familiar, that means the new One would be available running mostly stock Android (without HTC’s Sense skin) and should receive OS updates quickly, similarly to a Nexus device.