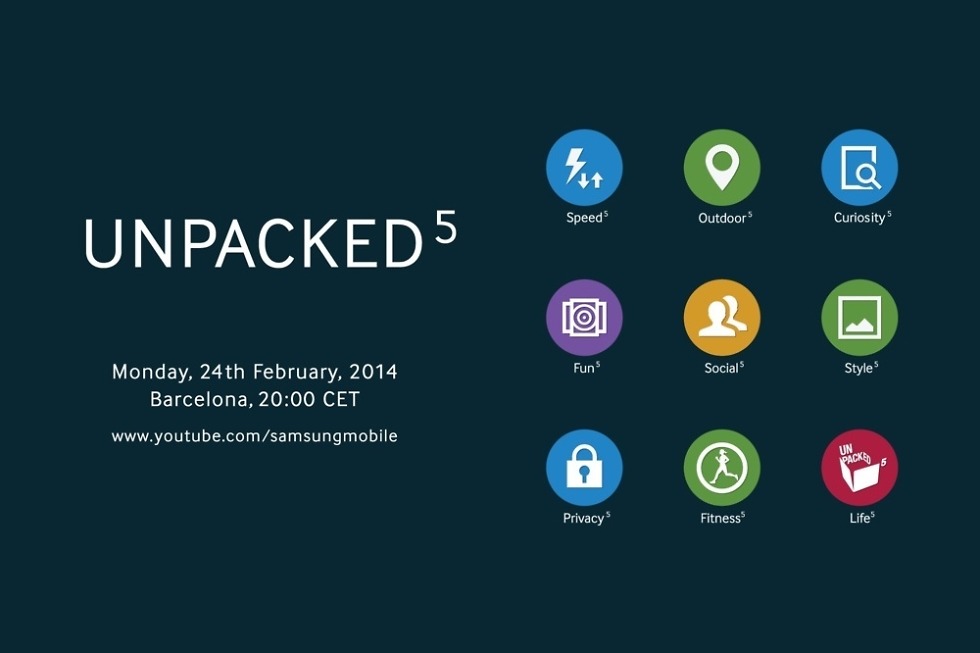 This morning, Samsung posted a revised invite for their February 24 “Unpacked 5” event with nine icons that represent nine potential topics of focus. The Galaxy S5 is almost guaranteed to be unveiled at the event, but the sales pitch is not something that Samsung has given any hint into until now. The nine icons represent Speed, Outdoor, Curiosity, Fun, Social, Style, Privacy, Fitness and Life.

Over the years, we have seen Samsung dabble in nature themes, include social and fitness apps, push a security suite, include the fastest processors on the planet, and even try to make a phone your life companion. All of those topics are listed again, along with others like curiosity and fun. So in other words, none of these topics are exactly new to the Galaxy line of phones, but they are shown to the fifth power, which could just mean that this is the fifth version of these ideas.

You could also look at these nine icons and assume that they have something to do with a revamped TouchWiz UI. A brand new TouchWiz already seemed like a given before we knew when the Galaxy S5 was coming after getting our hands on Samsung’s new Pro tablets and their own Kit Kat-TouchWiz UI, but maybe this further solidifies the idea.

Oh, Samsung also tossed in a random quote about predicting the future from Niels Bohr who said, “Prediction is very difficult, especially if it’s about the future.”