We were able to get our hands on the Galaxy NotePro 12.2 from Samsung this afternoon at CES in Las Vegas. The device, as one would assume, is quite large – sporting a 12.2″ Super Clear LCD display with a resolution of 2560 x 1600, this is the largest Android tablet from Samsung to come to the States.

Depending on which model and which market you buy the device, it will either feature an Exynos 5 Octa processor or a Snapdragon quad-core processor. Each variant features 3GB of RAM, an 8MP back-facing camera, 2MP front-facing camera, Android 4.4 with a revamped version of TouchWiz on top, an S-Pen, plus all of Samsung’s proprietary software baked in.

A neat feature that the NotePro 12.2 has that you won’t find on other models is a 4-way MultiWindow option. With this, you can view four different apps at the same time, all on one screen.

Below we have placed our hands-on video with the device at Samsung’s booth, so be sure to check it out. We also did a video to focus solely on TouchWiz and Android 4.4. You will definitely want to see that. 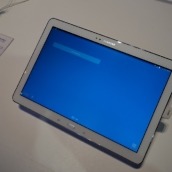 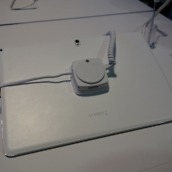 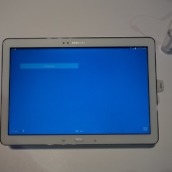 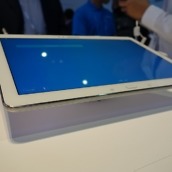 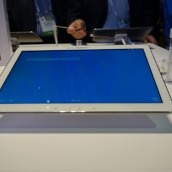