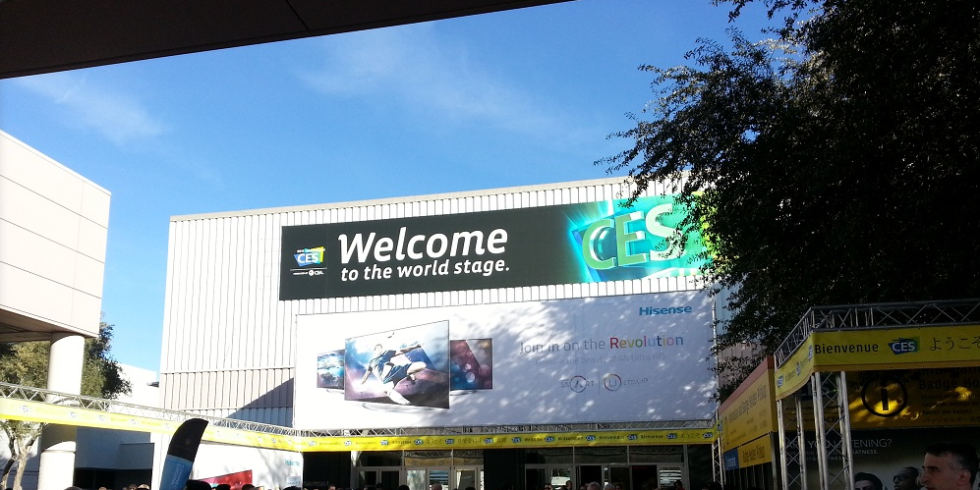 Fans of technology, the week you look forward to at the beginning of each year has arrived. It’s time for CES (Consumer Electronics Show). Our bags are packed, all the gear we could ever need is loaded up (and pictured below), and we are about to take off on our journey to Las Vegas. Thankfully, we aren’t on the east coast where media members are already having to cancel meetings due to winter storms. Our sunny west coast couldn’t be happier, and will ensure we arrive on time to bring you all of the happenings as they…happen.

For those not familiar with CES, think of it as the ultimate tech geek convention of the year. Over 100,000 attendees show up to Vegas each January to watch as mega-tech companies unveil new products for the upcoming year. In the past, we saw a lot of mobile-related items, though that has tapered off over the last couple of years since companies now like to hold their own stand-alone press events. Still, you’ll see everything from new trends in TVs to smarter cars to announcements on wireless products. It also tends to get weird at times too, with the slimiest of companies doing their best to hawk cheaply made accessories or services that no one in their right mind would ever use.

We also see what the industry has pegged as the trends of the moment and try to decide whether or not they will shine brightly or flop impotently. For example, two and three years ago, CES was filled with Android tablet on top of Android tablet. Almost all of them failed, but that was the big takeaway. Before that it was 3D TVs. This year, it’ll likely be about wearables. You’ll see great smartwatches, terrible stuff (like head gear), and hopefully a few standout items that will help shape the category.

As is typical around these parts as we embark, we try to bring you up to speed on our schedules, so that you can keep track of everything live. Many of the keynotes, press events, and other festivities will be streamed for the world to see. For the most part, we’ll be running live blogs as throughout, but will certainly do our best to embed live streams as they become available.

CES doesn’t official begin until Tuesday – well, that’s at least when the show floor opens at the Las Vegas Convention Center (LVCC). Being press, our week kicks off tonight, with an event hosted by NVIDIA. Then on Monday, you are looking at the big day for us, as the Monday before the gates open is press day at CES. This is the time that companies like LG, Samsung, Intel, Qualcomm, and Sony all own a 45-minute block of time where executives take to elaborately built stages and put on multi-million dollar shows to unveil new products. Once that long, long, incredibly long day is over with, we take to booths and other meetings throughout the rest of the week in Vegas. It’s a glorious and not-so-glorious time. 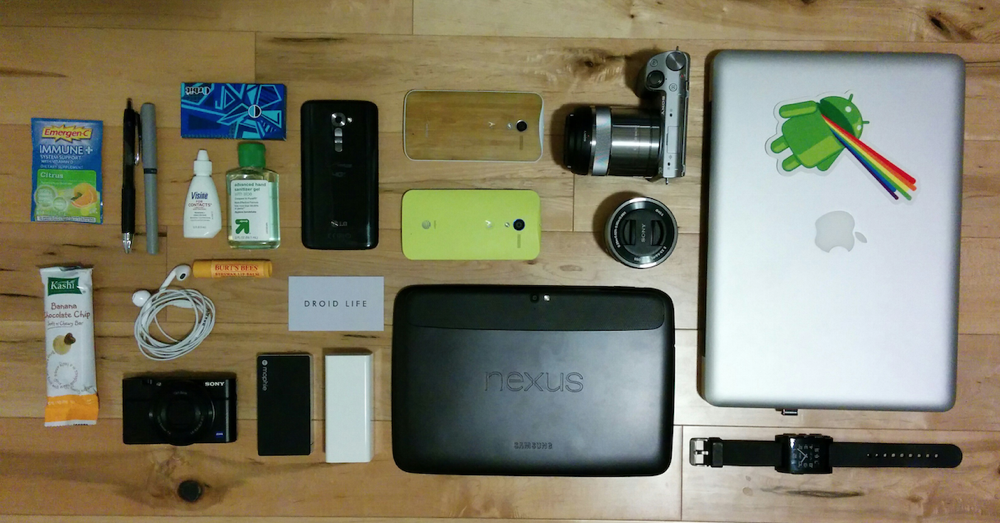 Every now and then, when we travel to events, readers ask what we bring along to help feed the greatest Android community on the planet with news. So, here are a couple of gear pics! Mine is up top, Tim’s is below. In my bag, in terms of tech stuff, you are looking at 13-inch Macbook Pro, Sony RX100, Sony NEX5Twith 30mm macro, Nexus 10, two portable chargers,  two Moto Xs, LG G2 (Verizon), and a set of Apple Earpods (sorry!). Non-tech stuff, I’m bringing banana chocolate chip Kashi bars for energy, Emergen-C Immune+ to fight off the CES zombie bird flu, aloe hand sanitizer (to stay clean and fresh), and gum for all those up-close meetings.

And that’s that. We’ll see you guys tonight with NVIDIA! And who knows, maybe we’ll see our good friend Dennis Rodman again.