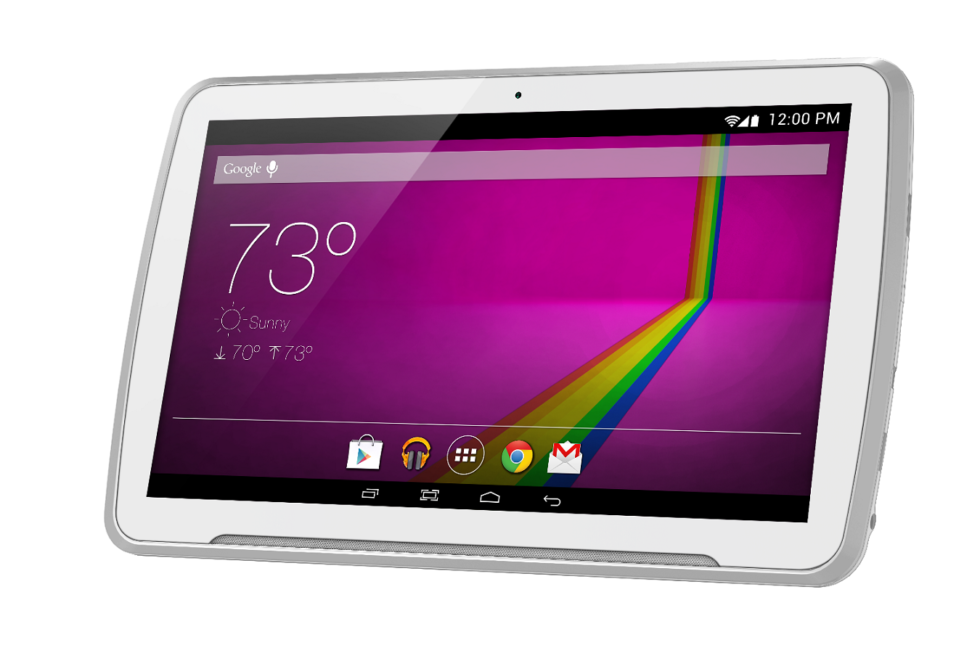 Today, Polaroid has given us a first look into what the company will be announcing when its booth opens up at CES next week. Three new tablets in Polaroid’s new Q line and a 4K resolution TV for $1,000 are the highlights of the show. Each of the new Q tablets is a different size, but they will all feature quad-core processors and run Android 4.4 Kit Kat.

The Q7, Q8 and Q10 will be featured next week at Polaroid’s booth at CES. Polaroid in a press release today said that these three WiFi-only tablets will be mainly focused on consuming media, but the front and rear cameras on each will allow users to “capture their favorite memories, and share them via email and social media channels.” Polaroid was sparse on specs with their new Q line, but we can expect a Snapdragon 600 and a decent display. The Q7, Q8 and Q10 will cost $129.99, $149.99 and $179.99 respectively.

Polaroid is also looking to bring its brand name to the television market and they are starting big. A new 50″ Ultra High Definition 4K LED television will be announced at CES next week. Polaroid is boasting more than 8 million pixels and 3 HDMI inputs on its new 4K television that will retail for only $999.99.

When CES goes live next week we will be sure to keep you posted on these new gadgets from Polaroid. Anyone interested at this point?

Polaroid Adds Q Series to their US Tablet Line at CES

LAS VEGAS, January 2, 2014– Polaroid is pleased to announce the newest addition to their robust tablet offering, the Polaroid Q Series.  The sleek new series will be on display in the Polaroid booth #13613 at the 2014 International Consumer Electronics Show, and is comprised of the Q7 (7” tablet), Q8 (8” tablet) and Q10 (10.1” tablet). All three sizes are Wi-Fi enabled and feature super-fast Quad-Core processors, and the new Android 4.4 KitKat operating system.

The Polaroid Q Series tablet line is perfect for media and sharing on-the-go. Each tablet features an extended battery life, HDMI Bluetooth and front mounted speakers for hours of entertainment anywhere. The front and rear cameras allow users to capture their favorite memories, and share them via email and social media channels through the tablets’ built-in Wi-Fi. Users also have access to a plethora of apps, games, movies, music and more to enjoy on their Q Series tablet through the Google Play Store.

Designed and manufactured by Southern Telecom, an authorized Polaroid licensee, the Polaroid Q Series line of tablets have a suggested retail price of $129.00- $179.00 and will be available spring 2014.  For more information on all the Polaroid products that will be launched at the 2014 CES show, visit: http://www.polaroid.com.

Las Vegas, January 2, 2014 – Polaroid is making it easier than ever to enhance your home entertainment with a superior quality, affordable new line of televisions.  On display in the Polaroid booth #13613 at the 2014 International Consumer Electronics Show, Polaroid will debut a 50” Smart TV that is Roku Ready® as well as a 50” Ultra HD 4K Television. These new televisions will provide consumers with unparalleled picture quality and several state of the art new features, all at an affordable price point.

“Not many people realize that Edwin Land was a pioneer in developing the polarizing technology used in modern televisions,” said Scott W. Hardy, President and CEO of Polaroid. “We are excited to bring consumers a state-of-the-art product at an affordable price point.  Families can share more movie nights together with our new home entertainment options.”

The 50GSR7100 50” Roku Ready Smart TV will allow consumers to stream more than 1,000 entertainment channels instantly with the revolutionary Roku Streaming Stick™. This built-in wireless device requires no cables and is powered by MHL, a port that closely resembles a standard H456 DMI and allows for easy plug-and-play use between the TV and the Roku Streaming Stick.  The 50” Smart TV comes equipped with three HDMI inputs to deliver uncompressed, crystal clear digital video and audio, and its contemporary, modern look will be sure to impress. Consumers will have complete control of their Roku Ready TV by custom remote and/or mobile app.

Offered by Empire Electronics Corp, an authorized Polaroid licensee, these LED smart televisions offer a contemporary, modern look and will come equipped with an updated bezel and TV stand. The launch plan includes screen sizes ranging from 32”-69”. The MSRP will range from $599.99 for the 50” Smart TV and $999.99 for the 50” Ultra 4K TV.  For more information, visit www.polaroid.com.