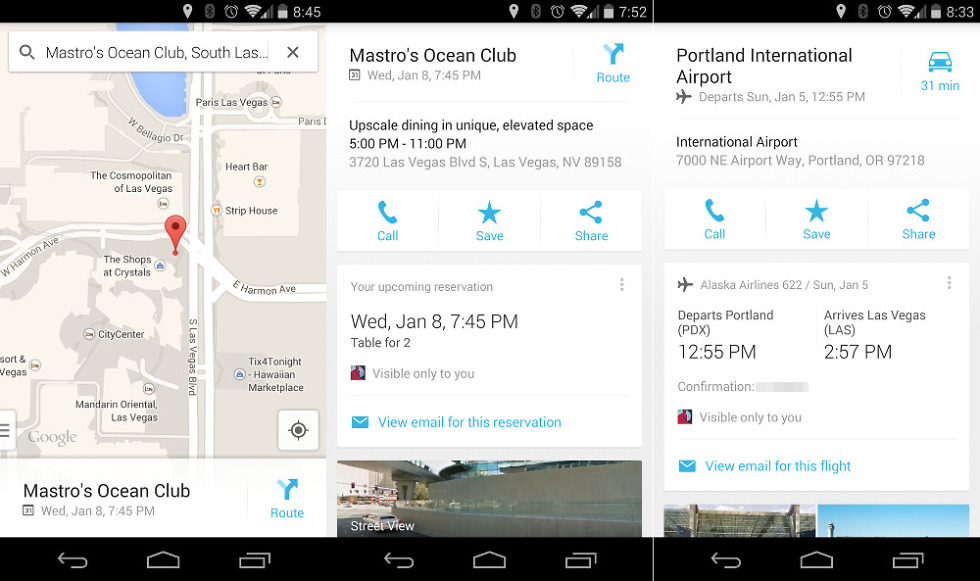 Yesterday afternoon, an update to the iOS version of Google Maps rolled out, bringing with it hotel, flight, and restaurant reservation info that it had pulled from Gmail. In other words, Google Maps on iOS became a lot like Google Now. If you have emails from flight reservations, upcoming hotel bookings, or a confirmation email from something like OpenTable, Google Maps will show you information in card-like panels should you search for those specific places related to those reservations.

Well, guess what? The update started rolling out on Android last night as well, as version 7.5. We received the update figuring there had to be something to it related to this iOS update and sure enough that’s exactly what we’re looking at. Of course (and to no one’s surprise), Google hasn’t updated the listing of “What’s new” yet in Google Play, so we had to do the in-app searching on our own. There could even be more included in the update, but we know it at least includes this snazzy new Gmail-pulling trick.

So how does it work? For example, if I were to do a search for “PDX airport” I should see a card with my upcoming flight info to Las Vegas for CES. You can see that’s exactly what the app is showing above (top right). The same thing works for restaurants, which you can see in the screenshot for Mastro’s in Vegas. With a quick search for “Mastros Vegas,” it took me to the location on the map, showed the name of the restaurant in the lower portion, but also snuck in our reservation time before I even opened the listing. This should work with hotels as well.

We should point out that this info is “Visible only to you.”

As always, we have the .apk below for sideloading should you decide not to wait for Google’s staged rollout to complete.