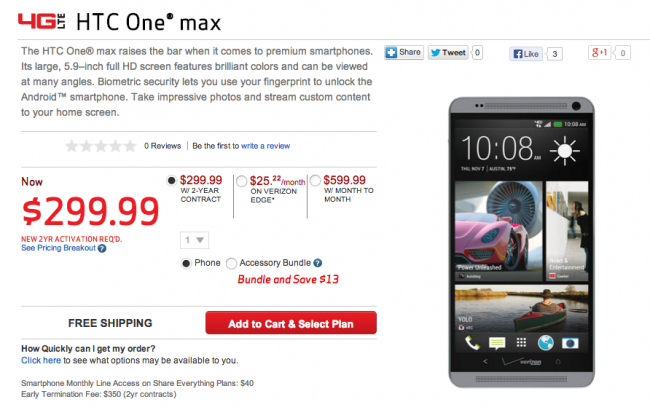 The HTC One Max, with its massive 5.9-inch HD display and Snapdragon 600 processor, is now available from Verizon for $299 on two-year contract or $599 at full retail (woof). Leaked for months before its unveiling, the One Max is sort of a mix between the original One and One Mini, only it has been supersized. With its current specs and gimmicky fingerprint scanner, it tends to fall in the mid-range One Mini category, only HTC and Verizon clearly think this is a top tier device given the price.

Outside of the display and 1.7GHz quad-core processor, you’ll find a 4MP (UltraPixel) camera with all its tricks (HTC Zoe, Highlights, etc.), BoomSound audio, HTC Sense 5.5, 32GB of storage, 2GB RAM, 3300mAh battery, and Android 4.3. The phone runs on Verizon’s LTE network here in the States, but also has the ability to connect to a bunch of global GSM networks.

We have one in house, which we’ve already unboxed, so stay tuned to learn more about HTC’s take on a mega-sized phone.