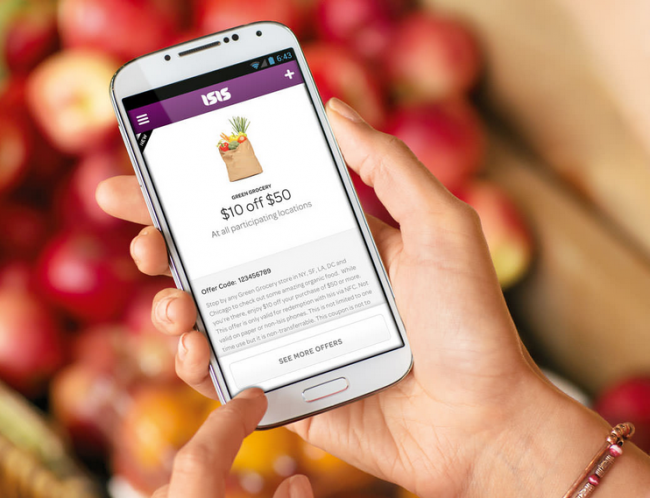 Isis Mobile Wallet, the mobile payment joint venture between Verizon, T-Mobile, and AT&T, has finally gone nationwide as of this morning. After what seemed like an eternity of testing, those who live in Salt Lake City, UT and Austin, TX are no longer exclusive members of this mobile payment community. Apps for each carrier’s version of Isis are available on Google Play, along with showcases of the service in individual carrier stores.

For those not family, Isis Mobile Wallet allows you to use your phone as your wallet. Thanks to tap-to-pay terminals at retailers and checkout stands nationwide, your phone can be used to pay for goods with credit cards stored securely on your device. Isis currently only supports Chase and American Express though, so even after a couple of years of testing, it’s not exactly the powerhouse mobile payment system we were hoping it would be. It does support loyalty and merchant cards in case you were looking for a place to digitally store those.

But assuming you have a Chase or American Express card that you’d like to attach to Isis, you’ll first need to pickup an “enhanced” SIM card from your carrier that will allow Isis to work. You’ll also have to own one of the 40 smartphones that have been deemed Isis-ready.

If you make the cut, the newly revamped Isis app that hit Google Play today should include a tutorial on how to get you up to speed and cards added. The previous version of Isis was, to put it bluntly, terrible. Hopefully this new version is much easier and smoother to use.

So, this is the moment we have all been waiting for. Isis is typically thought of as the reason we were blocked from Google Wallet for so long, however, it feels like it has completely under-delivered with its lack of universal credit card support. Or maybe I’m just still irked by the Google Wallet fiasco. Either way, feel free to give it a shot and let us know how it goes, assuming your device is supported.

NEW YORK, Nov. 14, 2013 /PRNewswire/ — Isis®, the mobile commerce joint venture created by AT&T Mobility, T-Mobile USA, Inc. and Verizon Wireless, today announced the latest version of the Isis Mobile Wallet® is now available to consumers for download in the Google Play app store and at thousands of AT&T, T-Mobile and Verizon Wireless retail stores nationwide. The Isis Mobile Wallet allows customers to pay at contactless payment terminals, and to save money through special offers and loyalty cards at participating merchants – all from their Isis Ready® smartphone.

The Isis Mobile Wallet allows consumers to shop and pay using their mobile phone, by securely storing virtual versions of a customer’s participating credit or prepaid cards, as well as coupons and merchant loyalty cards. To use the Isis Mobile Wallet, customers simply select a payment card and tap their smartphone on the point-of-sale terminal.

“Today’s nationwide launch of the Isis Mobile Wallet is a milestone for consumers, merchants and banks. It’s the start of a smarter way to pay,” said Michael Abbott, chief executive officer, Isis. “Together, with our partners, we’ve built a seamless mobile commerce experience. We’re pleased to bring the magic and simplicity of the Isis Mobile Wallet to consumers across the U.S.”

Starting today, customers with one of the more than 40 Isis Ready smartphones available from AT&T, T-Mobile or Verizon Wireless can receive a free enhanced SIM card from their wireless carrier and download the Isis Mobile Wallet for free from Google Play.** Customers who visit a carrier retail store to activate the Isis Mobile Wallet will receive hands-on support and education from store associates.

Customers can use the Isis Mobile Wallet at merchant locations nationwide that accept contactless payments such as Toys”R”Us, Jamba Juice and Coca-Cola vending machines. Aite Group projects that hundreds of thousands of locations in the U.S. will have contactless-ready payment terminals by year end, making it the most broadly deployed mobile payments technology at the point of sale. Explore local merchants at www.paywithisis.com/where.html.

“Isis is one of few truly independent wallets that is not tied to a specific financial institution, merchant or online marketing scheme. This wallet-as-a-platform approach positions Isis to unify the consumer experience across the many developing mobile shopping environments,” said Rick Oglesby, senior analyst, Aite Group. “The national rollout is an important step towards making mobile payments a part of everyday retail experiences.”

The joint venture is between AT&T Mobility LLC, T-Mobile USA, Inc. and Verizon Wireless and is based in New York City. The venture is chartered with building Isis, a national mobile commerce venture that will fundamentally transform how people shop, pay and save. The Isis Mobile Commerce Platform™ will be available to all merchants, banks, payment networks and mobile carriers. Isis, Isis Mobile Wallet, Isis Ready, Isis Mobile Commerce Platform and the associated logos are trademarks of JVL Ventures, LLC in the U.S. and/or other countries. Other logos, product and company names mentioned herein may be the trademarks of their respective owners. For more information visit www.paywithisis.com.