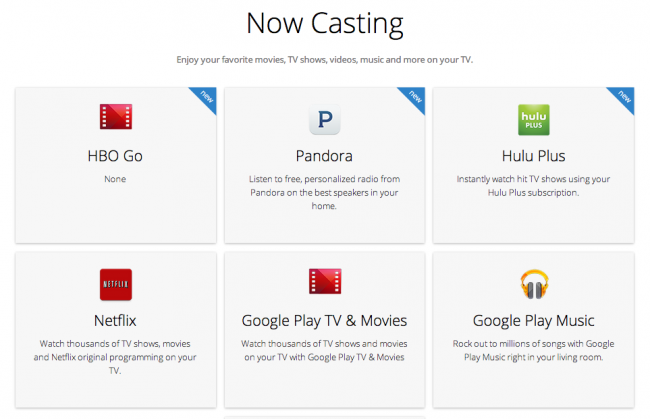 With Pandora recently receiving support on Google’s Chromecast HDMI media streaming dongle, along with Hulu Plus, we were all wondering when we would see HBO Go join the party since we saw traces of it during the device’s launch. Apparently we will be seeing it sooner than we had imagined. According to a Google support page for the Chromecast that lists out compatible apps and services, HBO Go is now shown sitting next to Pandora and Hulu Plus as the “new” apps to the ecosystem.

We captured a picture of the support page, which you can see above in case it’s pulled because someone jumped the gun and posted it early. We’re sort of thinking this did go up early as the HBO Go spot is using the Google Play TV & Movies icon along with a description of “none.” I’d say someone slipped up and posted it before all parties were ready to make this a reality.

The question now is, when will we hear something from either Google or HBO?

And who’s ready for Game of Thrones casting from anywhere at any time?