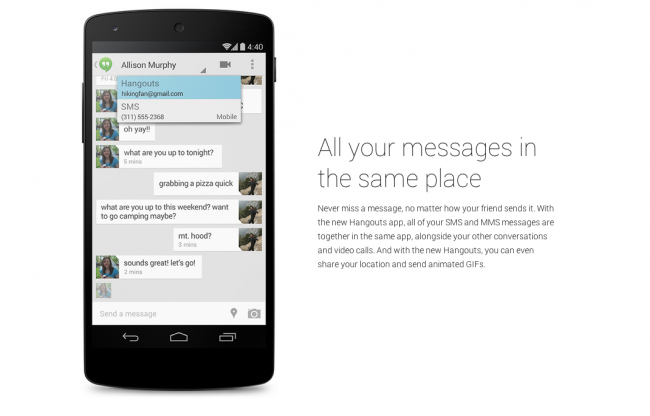 With each name change of Android, Google usually puts together a nice website that gives people a good run-down of what they can expect in the next update. If you head over to the one that went live for Android 4.4. KitKat today you can get a good description of all the changes upcoming. If you scroll down to the section discussing Hangouts, you can clearly see MMS messages listed in the description. Hooray!

Earlier this week, we were a little bit disappointed when MMS was missing from the announcement of the new version of Hangouts, but this makes us a bit more happy. There was no reason to boast about having “all our messages in one place” if MMS was not going to be included, so it is nice to see that Google added that feature in. Now if only they could integrate Google Voice as well, but that might be for the next version of Android.

Update:  In a G+ post, Android team member Randall Sarafa gave us a few more details on the MMS situation for Hangouts, along with a timeline for release.

– SMS/MMS (Android 4.0+): send and receive text messages in Hangouts! No more chasing conversations across apps, texts will now appear in Hangouts and you can reply right there. We also let you import all of your existing text messages into the app, send/receive group texts and even text emoji to your friends on Android, iPhone, etc.

– Animated GIFs: view and send GIFs in your Hangout, you can even send your Auto Awesomed photos (and kitten GIFs, of course).

– Location: you can now quickly share your location into conversations.

– Device, in-call, mood status: share what device you’re using, whether you’re on a call, or your current mood. Status appears in conversations right alongside the “read up to here” indicator.

He also said to expect the update in a “few weeks.” I know that we were all hoping for a “few days,” but it sounds like the Nexus 5 is getting this feature as somewhat of an exclusive for now.