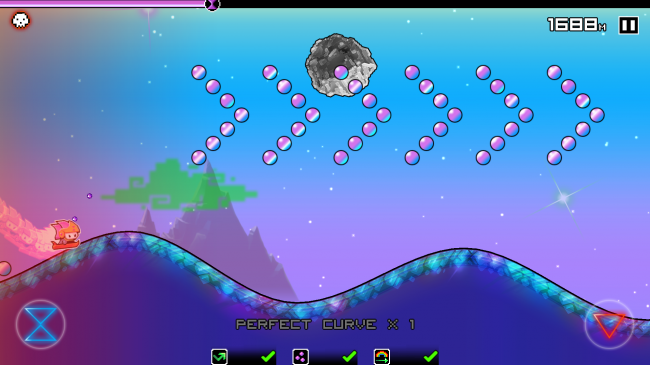 I always talk about Tiny Wings being a prime example of a game that is available on iOS which I wished would come to Android. There are many game developers that attempt to recreate the gameplay of Tiny Wings, but nothing comes close. With Time Surfer, a game that launched onto Google Play quite recently, I think we finally have a good replacement.

In Time Surfer, you play as a little character who is surfing through space, who also has the ability to control time. The gameplay is simple to master – just press on the right side of the screen to bring your character down and press on the left side to rewind time. What’s great about rewinding time is that if you hit a jump wrong or if you fall off the edge, you can just rewind time and hit the jump better. Although, your ability to control time is limited and you must refill the powerup with special crystals that you collect through the levels.

With the same gameplay as Tiny Wings, but with some added powerups and more unique appearance of levels, it’s a fantastic game. Try it out for $0.99 and let us know what you think.