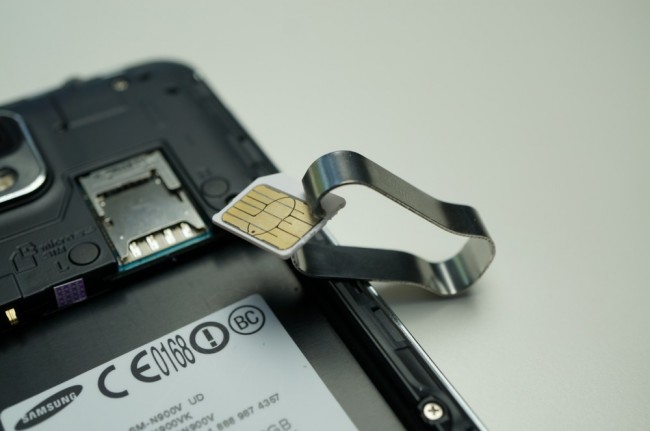 This morning, I attempted to remove the SIM card out of my international Samsung Galaxy Note 3 variant and struggled mightily until giving up and going with a pair of pliers to snatch the little guy out. You see, Samsung chose not to spring-load their SIM slot on the Note 3, so you can’t use a nail to press the SIM in to release it. It’s a weird move, since almost every other phone on the planet has a spring-loaded SIM Slot. It definitely threw me for a loop, causing way too much stress over something as minuscule as a SIM card.

As it turns out, I’m not alone in struggling with the Galaxy Note 3 SIM removal process. I took to Twitter to see if there was a personal lack-of-SIM-removal-DNA on my part or a wide-spread dealio and was told that many have struggled to remove the SIM from their Note 3. Some used paper clips, others used mighty amounts of pressure from their now-purple fingers, and a couple worked with extra sticky tape. As much as it makes me feel better than I wasn’t alone in the process, I need to point out that we are all fools. Samsung had us covered from day 1, we just needed to dig a little deeper in the boxes that our phones arrived in.

You see that little metal paperclip looking thing in the image above? That was included in both my international and Verizon variants of the Note 3. You know what it is? A SIM removal tool (S Pen removal tool originally). It’s in the same baggie as the replacement nubs for your S Pen, which you also probably overlooked and never found.

Update:  To clarify, the metal tweezer tool is officially for changing out nubs and not actually a SIM removal tool. At least it works at removing the SIM card as well! It’s a multi-purpose tool in our books and will still save you a trip to the toolbox or with any variety of methods you can think up to remove these things.

Once in hand, the little tool can be used to pinch (since it has teeth on one side) your SIM card to help slide it out. It’s not a flawless tool or process, but it certainly works and doesn’t require a toolbox. Check out the video below to see it in action.