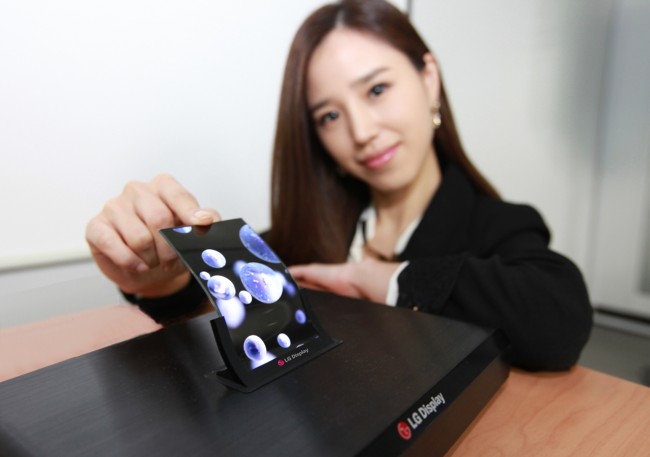 Flexible displays are all the rage these days for smartphones, with Samsung and LG battling to get theirs to market first and then onto devices. LG, as of late last night, is claiming that their flexible OLED is the first to be ready for mass production. In a press release, LG says that they already have a 6-inch flexible OLED that weighs just 7.2g and is only 0.44mm thick.

Typically when LG announces a new panel or technology that is made for smartphones or tablets, we tend to see an announcement of a product that uses the tech within a couple of weeks, sometimes days. With that said, LG did specifically mention that they expect flexible OLED displays to show up in automotive displays, and on tablets and wearable devices in the very near future. Their goal is to take an early lead in this market by introducing new products and enhanced performance and differentiated designs “next year.” That sounds to me like a flexible product isn’t coming until 2014.

Update:  Reuters is reporting that LG could announce a phone with a flexible display as early as next month. The press release clearly states “next year,” but hey, stranger things have happened. Who wants to start the Nexus 5 flexible display hypebeast story?

Should they announce something new, we’ll be sure to pass it along.

“LG Display is launching a new era of flexible displays for smartphones with its industry-leading technology,” said Dr. Sang Deog Yeo, Executive Vice President and Chief Technology Officer of LG Display. “The flexible display market is expected to grow quickly as this technology is expected to expand further into diverse applications including automotive displays, tablets and wearable devices. Our goal is to take an early lead in the flexible display market by introducing new products with enhanced performance and differentiated designs next year.”

LG Display’s flexible OLED panel is built on plastic substrates instead of glass. By applying film-type encapsulation technology and attaching the protection film to the back of the panel, LG Display made the panel bendable and unbreakable. The new display is vertically concave from top to bottom with a radius of 700mm, opening up a world of design innovations in the smartphone market. And only 0.44mm thin, LG Display’s flexible OLED panel is the world’s slimmest among existing mobile device panels. What’s more, it is also the world’s lightest, weighing a mere 7.2g even with a 6-inch screen, the largest among current smartphone OLED displays.

According to research firm IHS Display Bank, the global flexible display industry will see dramatic growth and become a USD 1.5 billion market by 2016, exceeding USD 10 billion by 2019. LG Display plans to advance flexible display technologies and bring innovation to consumers’ daily lives with the introduction of rollable and foldable displays in various sizes.