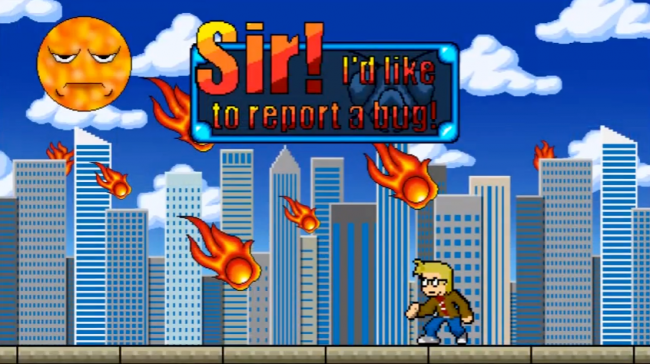 There are always a ton of new games hitting Google Play for Android devices. Every now and then, you come across a real gem, and we think we found one in Sir! I’d Like to Report a Bug. You play as QA tester Reggie, who is not your average hero – He is just a regular guy, who enjoys lounging on his couch and doing basically nothing. What Reggie is about to find out, is that he must save the entire planet from ultimate deletion thanks to some out-of-hand bugs and glitches that are about to destroy the world.

The game itself is quite remarkable. It has various forms of 2D art, a killer soundtrack, a very challenging difficulty level, and plenty more aspects that are sure to keep you glued to your device.

What is even more interesting is the way the development team is making money from the game. According to the team, the game is completely “post crowdfunded,” which means that they allow anyone to download the game in its entirety, with no IAPs. If you enjoy the game, you are then welcomed to donate money through the application, which then goes into an online pool. If the team’s goal is met, then they release additional content to the game for free. Pretty cool idea, right?

Go grab it from Google Play and try it out. Report back on what you think down below in the comments.