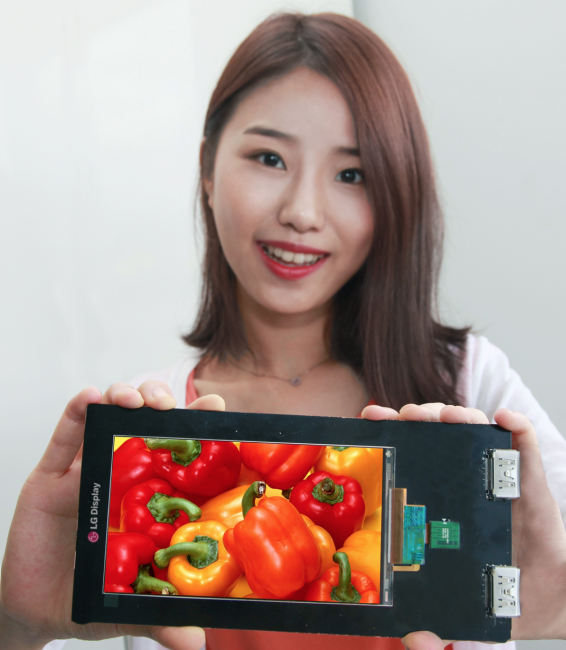 Step aside 1080p, QHD is in the building. No, not qHD – QHD. LG announced last night that they have created a brand new 5.5-inch Quad HD display with an insanely high resolution of 2560×1440, made for smartphones. In case you were wondering, that’s 538ppi. Yes, we are now moving into the +500 arena and shaking our heads the entire way.

As you can imagine, this LCD panel has all sorts of “world’s first” titles attached to it, like world’s highest resolution. It sports four times the pixels of a 1280×720 display, helping it to reproduce “more delicate colors” as well as improving upon contrast and vividness. As you can imagine, everything you view on the new Quad will look more lifelike, crisp, and as LG puts it, on par with Blu-ray video.

The new Quad HD LCD from LG is also the world’s slimmest and narrowest panel on the planet, a title their 5.2-inch LCD on the LG G2 held just a month ago. It’s only 1.21mm thick, with a 1.2mm bezel. If you want more numbers, that’s 12% thinner than the 5.2″ FHD panel on the G2. Ridiculous, right?

No word on when this panel will sample or ship in devices. But I think it’s pretty obvious that LG’s next phone, likely a G Pro 2, is going to sport this thing.

Seoul, Korea (August 21, 2013) – LG Display [NYSE: LPL, KRX: 034220], a leading innovator of display technologies, announced today that it has developed the world’s first Quad HD AH-IPS LCD panel for smartphones. At 2560X1440 with 538ppi, the new 5.5-inch Quad HD panel is the highest resolution and ppi (pixel per inch) mobile panel to date, and provides a glimpse at what’s next after current Full HD smartphone panels, critical given the growing trend towards larger displays.

In addition, the new Quad HD panel will enable users to enjoy a full view of PC-version web pages at a single glance without image distortion; a contrast to current Full HD displays which only realize 3/4th of a full screen. Also, even when enlarging the screen, users will be able to enjoy undistorted and sharper text.

LTPS-based smartphone displays are expected to record 765 million units in shipments next year according to research firm DisplaySearch, as displays with larger screens, higher resolution, and less power consumption prove key to competitiveness in the premium model segment.