Here are your answers to Volume 14 of the DL Q&A Sessions. Clearly, a lot of you are focusing on the Moto X, which makes sense, since it was probably the most hyped Android device of the year. In addition, many Galaxy Nexus owners are looking to upgrade soon on Verizon, so we touched on which devices we could see land on the carrier, such as the One Max from HTC and the Galaxy Note 3. We got asked about our preference towards Yeezus or MCHG which is interesting, so give a look down below and see what the DL staff has to say on the matters.

Do you think Google plans to make the Nexus available on Verizon?

K:  Not a chance in hell. Google hates Verizon. OK, they may not hate them, but after the Galaxy Nexus debacle, I’d be incredibly surprised to see another Nexus work on Big Red’s network. Well, there is always a chance that we see one with an LTE-only phone, but we’re still a year away from that happening.

T:  As much as I would love to say yes, I will have to side with Kellen and go with, “not a chance in hell.” Once the VoLTE stuff comes around and there isn’t much of a GSM vs. CDMA thing going on in America, then we can start seeing all of the carriers working more closely with Google. I think for now, Google will stop at almost nothing to make sure Verizon doesn’t somehow screw up a user’s experience with one of their devices going forward.

R:  I doubt it. I think they’re going to let that relationship cool for a bit more before they try that again. Maybe next year with VoLTE.

E:  I think it will depend on how the Moto X does. The Moto X is one of the first phones to come to Verizon that is pretty much the same on all the other carriers that it is coming to. If the Moto X sells well enough on Verizon, I think it will change their perception of “our phones have to be different from everyone else’s. That would bode well for a Nexus coming to all carriers with the same hardware.

Do you think we’ll see the HTC One Max on Verizon, and if so would you favor it or the Note III as your phablet of choice?

K:  We don’t know enough about either phone yet, but Samsung seems to be the only OEM who has created an experience that is fine-tuned for that large of a display. LG has tried and struggled. Sony has no idea what they are doing. HTC could, but if it ends up just being just blown up Sense 5, I would go Note 3.

T:  I want to say no for the One Max coming to Verizon. Users only need so many options, am I right? No reason for Verizon to make people decide between a massive One or the Note 3. Neither device has launched yet, so we still have time to see what they plan on doing. As for the second part, I would go Note 3 all the way. Not even a question. Cult status is back in full effect.

R:  I don’t think we’ll see the One Max on Verizon. If you’re off of Verizon and looking for a phablet, I would think you would want the Note 3 unless the Max comes with a stylus like the Flyer did.

E:  I think we will and if my history of preference holds true I will enjoy it more than the Note 3. Aluminum for the win. 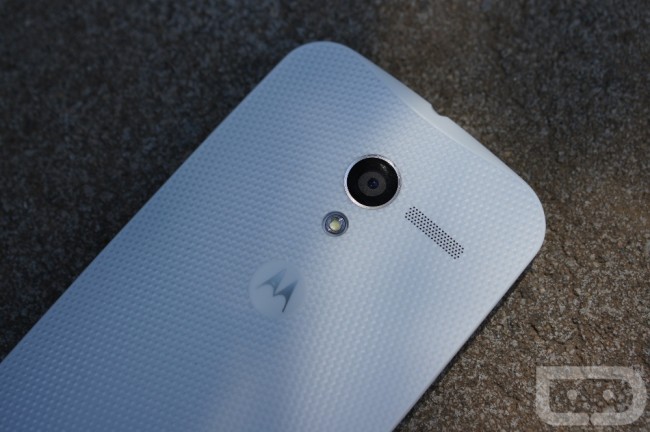 Now that the Moto X has become official, given its specifications and its price tag, how well do you guys expect it to sell even though some might consider it under-spec’d or over-priced?

K:  The iPhone is never sold on specs and Apple usually can’t keep them on shelves for months after launch. Motorola is no Apple, but they are going to sell people on experience and image with the Moto X. I don’t think it’ll be the next Galaxy or iPhone in terms of sales, but it should help Motorola start to make a return.

T:  Normal people don’t care about specs. Dual-core vs. quad-core doesn’t mean jack to them, so Moto is going to completely ride that customization option. Once it’s available for more than AT&T, this device could sell huge if pushed the right way. People love custom colors and all that crap, so I could really see that being the biggest aspect, not the specs.

E:  People will slowly start to come around. I know it isn’t the best specs, but every review or post that I’ve read of people who have actually held the device was a glowing one. Once it gets into the public’s hands I think they will see what Moto was trying to do with this phone and it will sell accordingly.

Which was the better album this summer – Kanye’s Yeezus or Jay Z’s MCHG?

K:  If you listen to Yeezus and ignore the amateur lyrics, it’s clearly the better album in terms of production. But since Kanye can’t rap for sh*t (Hurry up with my damn croissants? Really?)…eh, it still wins. I’m still listening to almost every track on it, while I’ve only found 2 or 3 from MCHG that I can handle over and over. Both good, but Yeezus wins in my book.

T:  For me, it’s a toss up. I hate Kanye’s attitude, but his music is okay. I love Jay Z, but this album is iffy. So it’s a tie for me. If I could mash the two into one album, I would be a happy camper. Send It Up is my jam from Yeezus and Holy Grail is my favorite off of MCHG.

E:  I enjoyed them both, but MCHG had a lot more substance in my opinion. Yeezus had some banging beats which I loved, but a lot of tired lyrics which we seemed like we had already heard. MCHG felt new and engaging, and long. Yeezus was over before I knew it, whereas MCHG was a lengthier album overall.

If Google invited you guys to come and design a Droid Life edition phone what would it be like, hardware and software wise?

K:  Whoa, crazy question. Well, since I’m currently digging the Moto X, I’d say give me a Moto X with a Snapdragon 800 (with X8), fine-tune the camera software, and…that’s it. Stock Android is stock, so we know what we’re getting with software. I like the look of this phone, as long as Google would let anyone customize the appearance. Sell it for $349 with 64GB of storage and I’m good.

T:  Awesome question – It would need an awesome display, 5″ would suffice. 720p or 1080p is fine, depending on who makes it. I would need a Snapdragon 800, 2GB of RAM, 10MP camera that DOESN’T suck, a back texture like the HTC One X (so smooth), front-facing speakers like the One with BoomSound, audio jack on the bottom of the device, and on-screen buttons. As for color, it would be all black except for some pink volume and power buttons.

E:  Black on pink of course. Everywhere. As far as specs go I’d put it in a 4.7″ screen with a Snapdragon 600 alongside 2GB of RAM for some performance and a 10MP camera. I would try and pick pieces of other OEM skins and place it in there; Moto X’s touchless controls, Samsung’s camera software, HTC’s Beats audio. Stock Android everywhere else. 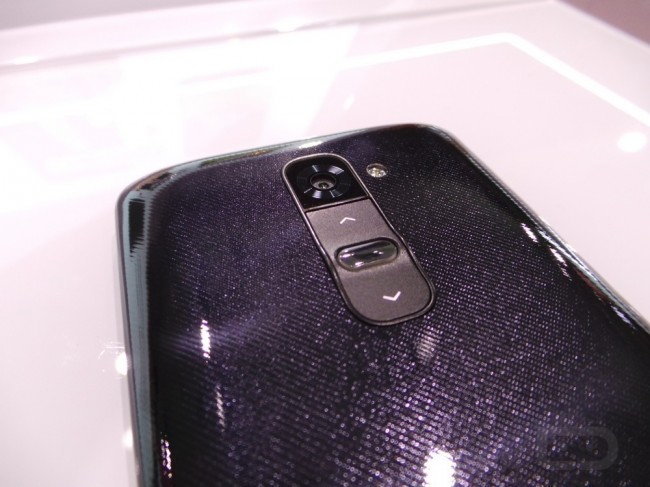 Do you really like the form factor of the LG G2?

K:  Not personally, no. It looks like a Galaxy S4 rip-off.

T:  As much as it pains me to say, I think I still do! It’s really weird at first, but the device feels great in hand. The G2 is lightweight, but gives off a sturdy feel. Once we get a review unit, I’ll have to really take on those back buttons. For the hour I played with it this week, I can’t say whether the design is a winner or not.

R:  Nope. The first time I heard about the buttons on the back I didn’t like it. I get what they’re trying to do, but I don’t think it makes sense from a practical in-your-pocket perspective.

What city (or cities) are your favorite to visit for press events?

K:  San Francisco for me. It’s closer than NYC, and it just feels so much more relaxed. I’m also west coast biased. Second would be Vegas, because I just love Vegas. New Orleans for CTIA a couple of years back was also a fantastic time.

T:  I would say San Francisco. I used to live there, so I am extremely biased. I think it is the most beautiful city in the US, so this was an easy answer. New York is amazing, because I love all of the architecture, but there are too many people for me. I like a more relaxed and laid-back atmosphere.

R:  I’ve only ever covered an Amazon event out here in southern California. I would love to cover something out in New York or San Francisco. 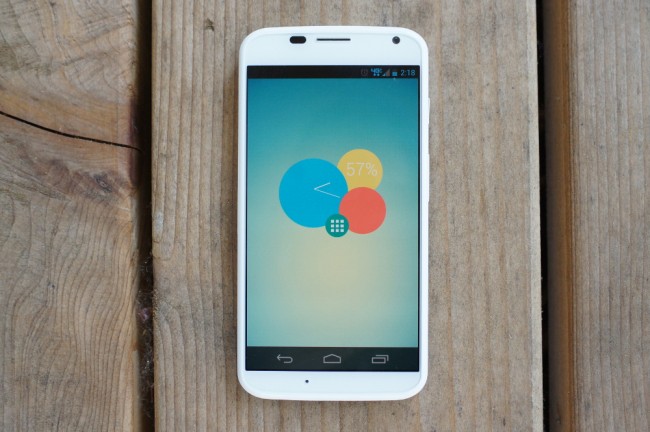 What widgets get dropped onto your home screens as soon as you pick up a new phone?

K:  I’m pretty minimal here, but I always find a clock widget at first. Currently jumping between a few different UCCW skins, all of which we have featured lately. Then, it’s calendar on the first screen to the right, and Google Now to the first screen on the left. That’s it.

T:  I throw on the Google Now and Sound Search widgets. That’s it.

R:  Any.Do on the left screen, UCCW or Beautiful Widgets on the main screen (sometimes Eye in the Sky), Calendar widget on the right screen.

E:  I’m a sucker for a clock widget loud and proud on my main screen, so UCCW has been amazing for me. Other than that, every phone and device I have uses the Google Calendar and GMail widgets. On my tablets I use the Google Play Music widget because it shows content so well.

When you go to press events, what’s the worst/weirdest/most shocking thing that anyone of you have seen or experienced while traveling?

K:  At events, I’d say press people wearing Google Glass. Dear press persons, you are not developers – you should not have developer versions of Google Glass. It’s pointless. Other than that, Dennis Rodman in Vegas still brings back hilarious memories. The Geek Guys.

T:  We have seen and done some crazy things, but the weirdest was our run in with Dennis Rodman. It was so a-typical Rodman. As for worst or shocking, that’s hard to say. Nothing really shocks us these days and when it comes to the worst, having crappy WiFi connections during the events is so frustrating. Gimme teh WeeFeez!

R:  Like I said before, I only covered one event and I didn’t see anything especially weird. What I did see was a lot of my favorite journalists working really hard to get news out to their readers. It was really, really cool to see them in action.