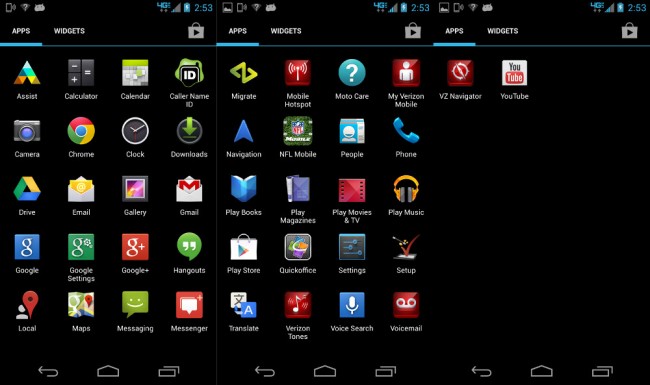 The Moto X is not bloatware-free. Early reports suggested that Motorola was going to do everything in their power to keep the bloat to a minimum, possibly on an Apple level, but I’m not sure they won that battle. Sure, they kept the amount down when compared to phones from LG and Samsung, however, there are still plenty of pre-installed Verizon apps that cannot be removed.

In the set of screenshots above, we’re counting nine (9) in total – Caller Name ID, Mobile Hotspot, NFL Mobile, QuickOffice, Verizon Tones, Voicemail, Setup, My Verizon, and VZ Navigator. Now, you could argue that a couple of those aren’t actually bloatware and that they are useful, but by our standards, they make the cut.

You could probably toss in Assist, Migrate, and Moto Care if you were getting really picky, but since those are a part of the Moto X experience, we are leaving them out.