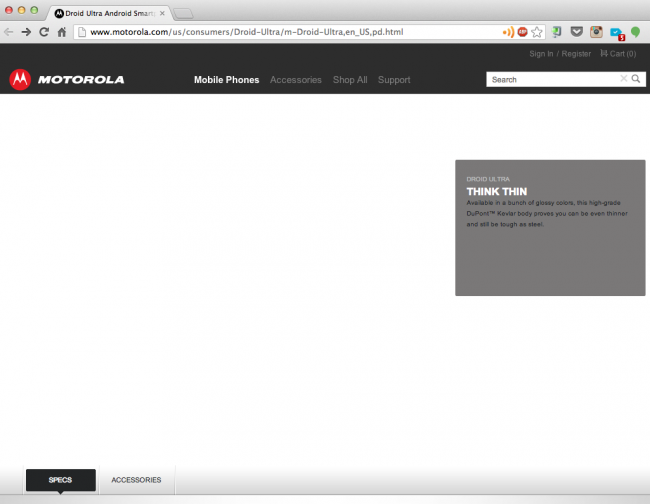 Last week, @evleaks reported that Motorola and Verizon had partnered up to release a new line of DROID phones with a similar naming scheme to last year’s RAZR HD and RAZR M pairing. Instead of RAZR though, sources of ours claim that Moto and Big Red had chosen the name “Ultra” this time around, but would still release regular and MAXX editions along with a smaller M model. While details outside of the name were scarce, tonight a reader of ours stumbled upon a landing page that is publicly displayed on Motorola’s site that seems to confirm the existence of the ULTRA line of phones.

No photos are a part of the page (since it appears to be a work in progress), but there is a paragraph (pictured below) that tells us to “Think Thin.” It also says that the “DROID ULTRA” will be available in a “bunch of glossy colors” and a “DuPont Kevlar body” that is thinner than previous models yet still “tough as steel.”

The landing page lists an entire spec list as well, but it matches up identically to the RAZR M and is liking a cut-and-paste job as they continue to prepare the page for launch.

So that’s all we know for now. The idea that there will be multiple colors to choose from does match up to earlier reports that the new Motorola phones may end up being customizable. The focus on thinness is a bit surprising, though.

I’m starting to wonder – is the Moto X variant for Verizon this “ULTRA M,” with the regular ULTRA and ULTRA MAXX falling in line as the new “hero” devices that CEO Dennis Woodside spoke of a few weeks back? 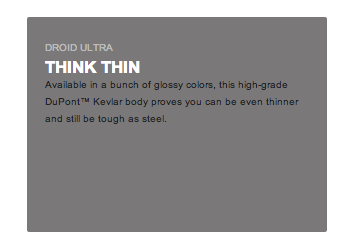 Update:  We should point out that @evleaks provided some new info over the weekend through another Tweet, saying: