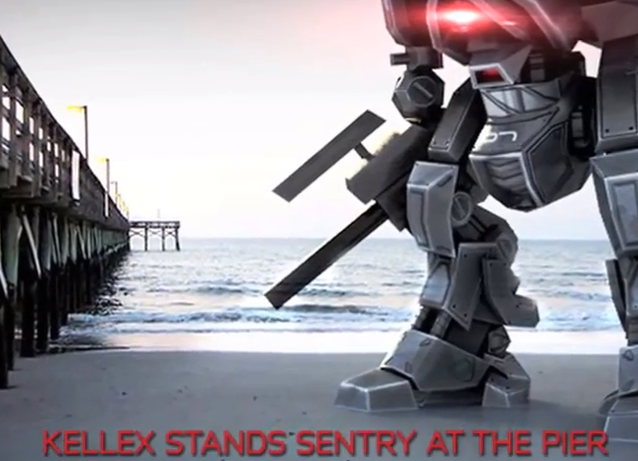 Well, one thing is for certain – Verizon and the @DroidLanding Twitter account are launching a new augmented reality contest that includes the DROID brand and a bunch of robots. A promo video for it all has been posted to Verizon’s YouTube channel, which we have included for you below. We still aren’t exactly sure how it will all go down, but there is a scene at the 16-second mark (captured in the image above) that mentions my online alias (“Kellex”) specifically, and that I’m standing “sentry at the pier.”

Am I now a wARrior robot that will be a part of the contest? Is it just a coincidence and they are referring to someone else? I have no idea, but it’s at least exciting to think about.

I’m not the only one mentioned, though. There are a bunch of other robots featured along with specific locations. It sounds like the augmented reality will incorporate some sort of robot battles, likely using an AR app that can be installed on your phone.

Mentions of D:COM Alpha and DROID Combat appear at the end of the short teaser clip. The contest is supposed to begin in June, so that means any day now.

Yeah, this is about to get awesome.

Update:  This may be the app, though it can’t be installed on anything yet.