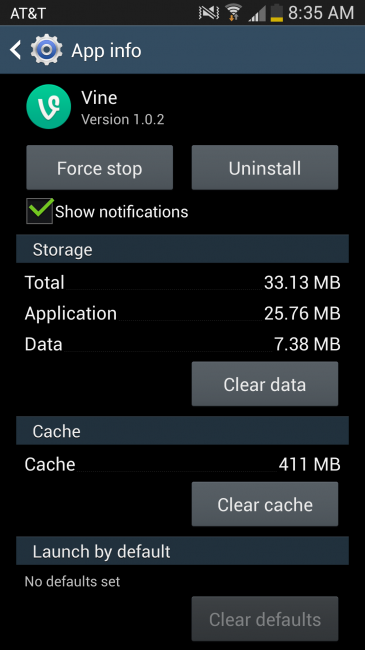 As happy as we were to see Vine finally arrive for Android, we somehow get the feeling that the developers could have easily worked on this app for another month or so before releasing it to Android. From crowded servers to app hackers taking advantage of the allowed video length settings, this app has been pretty stressed. Nevertheless, it is Vine and people will continue to use it, so we wanted to make sure you knew of another issue that seems to be plaguing frequent Viners.

If you find yourself on Vine a few times a day, then you should head over to the Settings menu on your device and look at the app’s info. Apparently, the developers forgot to add a limit to the amount of cache the app is allowed, so I found myself with almost a half gig of cached Will Sasso Vines. Because yes, that’s what everyone needs on their phone. Some users who go through more Vines than myself have reported well over a gig’s worth of cache being stored, easily adding up and taking up your device’s precious memory.

There is no fix yet, but to slap a Band Aid on the problem, you can simply clear the app’s cache through the same Settings page, resetting the app to zero. It won’t log you out or mess with your account, it will only wipe the stored Vines on your device.

Hopefully the developers will fix this issue as soon as humanly possible.