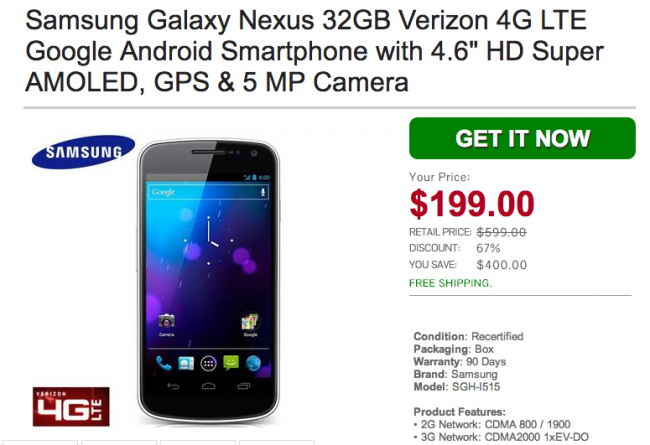 Daily Steals is currently running one of their “Last Calls” collections promos that includes a variety of Android products that may be worth a look should you be in the market for something new or “recertified” but don’t want to sign a contract. The Galaxy Nexus LTE on Verizon is one in particular that is carrying the low price of $199. And again, that’s the full retail price for the device, meaning you don’t have to sign a contract to pick it up. The phone is “recertified,” so you may only want to consider this one if you are desperate. Replacement G-Nex models are known to have issues.

But the deal also includes the unlocked Samsung Galaxy S4 for $599 (unlocked model doesn’t work on LTE in the U.S.), the incredibly old DROID X for $69, original DROID RAZR for $169, and more. There are listings for a couple of Samsung tablets, the Blackberry Playbook, GSM Galaxy Nexus, Galaxy Note 2, Motorola Atrix 2, and the Microsoft Kin One. Lots of options.

Feel free to give them a look before they sell out.