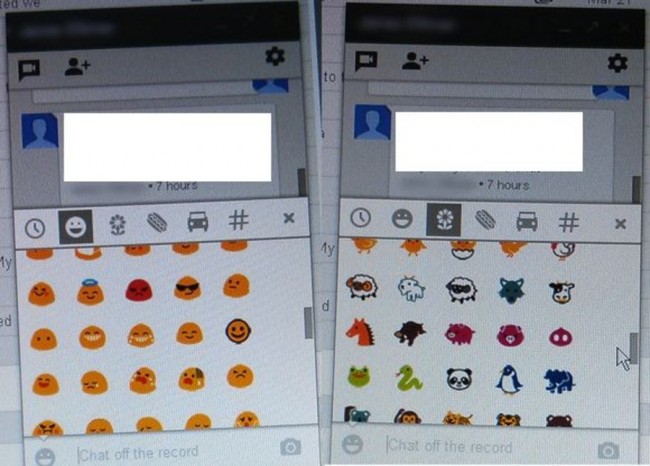 After we first outed the name Google Babel last week, and the new unified chat app by Google hit internal testers, we figured it was only a matter of time before the first shots of it emerged. Thanks to TechRadar, those first shots may have arrived today. Someone tell Google that the 90s want their emoticons back.

First, the name “Babel” is seen once again thanks to the shot below which shows a message of “What do you think of Babel in Gmail?” as the user hovers over a feedback button. I’m sure this could be faked by any novice web developer, but since it was included in a batch of photos that would likely take hours to create, we’ll give them the benefit of the doubt. Just keep in mind that as our own Tim loves to say, “Nothing is confirmed.”

Next, in the screenshot at the very top, we’re seeing the first look at the UI of Babel while in Gmail or potentially Google+ for that matter. The conversations appear more threaded than in the past and include contact thumbnails. We’re seeing a Hangout button, option to add more contacts to the conversation, a settings button, camera button, and a collapsable bar that gives you the ultimate-emoticon list of all time. We’re seriously seeing six tabs of different emoticons. I know Google has become a fan of emoticons again, but do we really need flags, various animals, smiley emotions, and emoticons with food themes? Ugh, Emoji. Moving on.

According to TechRadar’s source who they question a bit throughout their post, Google+ integration is a must if you are looking to send photos over Babel. This isn’t surprising in the least, as Google has been pushing G+ as a product heavily since it launched.

So this is essentially what we expected from Babel, isn’t it? A revamped chat UI that works across multiple services including Gmail and Google+. What we need now, is a look at the actually Android app. Or do we think Google Talk will die and we’ll all be forced into Google+ to carry on our Google Talk conversations? Oh, how scary of a thought is that?